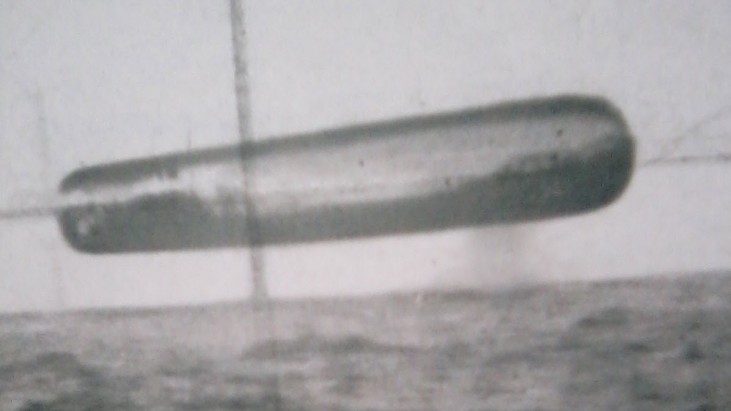 The following case was submitted by Investigator/Researcher Alex Mistretta, who can be contacted at: mistretta1020@gmail.com. His has graciously allowed the following photographs, and his research, to be archived here on The Black Vault for reference.

Check out the entire photo gallery of the objects, along with the background, at http://www.theblackvault.com/c.....arch-1971/

The high resolution photos have been added to The Black Vault. These are the actual photos, not scans from a magazine: http://www.theblackvault.com/c.....ch-1971/

On inspection of the photograph USS-trepang-2-1.jpg, I found a shape hidden within the cloud that could be the object seen in USS-trepang-4-1.jpg. Perhaps the hidden object is the aggressor.

The object in USS-trepang-1.jpg resembles the Andromeda Gerat.
http://greyfalcon.us/restored/.....0Reich.htm
The close up of the cone/triangle object (5-1.jpg) to me looks to be the smaller object in 7.jpg 8-1.jpg and 9.jpg.
Maybe these objects are later versions of the Vril craft possibly being used by both the USA and USSR.  Ive heard stories of a Russian craft called a cosmosphere, maybe this was Nazi Vril technology also
http://www.bibliotecapleyades......esky03.htm
I once filmed what looks to me like a cigar UFO, I caught it by accident as I was originally filming to see where two Buzzards may have been nesting.
Please feel free to use the film on your site but if you would kindly refer to the author of the film as "MrGreyface" and not use my name as appears on this email.
Goto 01:50 to see it more clearly
Im not sure if the picture is visible above, this is the first time I have posted to a forum, so have no clue what Im doing.