Want to watch B'liar lie? Put your name down for a ballot.
Page: 12

A public ballot will be held for people wanting seats to watch Tony Blair's appearance before the Iraq Inquiry.
Mr Blair, PM when Britain went to war with Iraq in 2003, will appear at the central London hearing for one day, during the fortnight from 25 January. 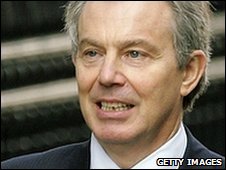 Inquiry chairman Sir John Chilcot said there had already been "considerable interest" from people wanting seats.
He said there would be separate ballots for the morning and afternoon sessions of Mr Blair's full-day appearance.
The Iraq inquiry is looking at UK policy in the run-up to the war and its aftermath and has already heard from various British officials - including Mr Blair's former advisers and military representatives.
Travelling distances
Mr Blair will be the highest profile person called when he appears.
Announcing the ballot, Sir John said: "There has been considerable interest from members of the public wanting to know how to get a seat for this particular hearing."

Because some people would be travelling long distances, it was important to ensure "certainty" about whether they would get in or not, he added.
"We believe the fairest way to do this is to allocate seats by ballot."
The exact date is not yet known but Sir John said to help people decide whether to enter the ballot, the panel had confirmed that it would be some time in the fortnight from 25 January. The date will be announced on the inquiry website a week in advance - ballot forms are also available on the website.
'Need to be fair'
Mr Blair will appear for a full day - three hours in the morning and three in the afternoon - and two separate ballots will be held for both sessions to "maximise access" for people.
A third of the seats have been reserved for the families of armed forces personnel and British civilians who died or went missing in Iraq, which will be allocated in a separate ballot.
Sir John added: "We've met a number of families as part of our work and many have asked about this particular session. We've taken into account their views in making the arrangements and the need to be fair to all those with an interest in this process, including the witnesses."
The ballot tickets are non-transferable so cannot be sold or given away as a present, the inquiry says.
Mr Blair's former spokesman Alastair Campbell is due to be questioned by the inquiry panel next Tuesday.

I won't be attending this, unfortunately, but I promise myself here and now to do all I can to be there at least once for his eventual trial.

I did put myself down, I didn't get in sadly.

Although the ever mounting evidence is suggesting that it was a load of Bollocks, I'm about to post that in a second.

Bollixed by bollocks-- a sad state...

Hiya, lash. I'd stay on topic, but the original poster is no longer with us (in the membership sense). How's things in the UK? Are folks still lambasting Blair, or did they just lynch him without a trial? 😯

"vulcan6gun" wrote: Hiya, lash. I'd stay on topic, but the original poster is no longer with us (in the membership sense). How's things in the UK? Are folks still lambasting Blair, or did they just lynch him without a trial? 😯

Hey mate, how are you (It's been a long time hasn't it)? 😀 People are still calling for Blair to be put on trial but we've got an election coming up soon (may 6th is the day tipped but I can't see it happning then) so people have dropped this subject for a little bit. When the Election is over with this inquiry will still be going on and the little bits of news that is coming out of this will be looked at.

I wouldn't mind seeing Blair go up for High Treason but sadly the first thing labour did back in 97, before they took out guns, was get rid of Hanging for High Treason. I'm not going to get to watch him hang but I'm going to be able to watch Labour fall, both as good as eachother really.

No biggie: a tree, a tire and a hawser can still make a rope swing. 😎

I forget which Mel Brooks movie this came from, probably 'Blazing Saddles', anyway: 'No noose is good noose, ha ha!'

Tony Blair is probably rich enough to find a suicidal double, which leads us to the Groaner of the Week: People would call it 'The Blair Switch Project'.

"vulcan6gun" wrote: No biggie: a tree, a tire and a hawser can still make a rope swing. 😎

Yes but that's not legal. The joy of watching a Legal hanging will be much more than watching that. 😉

It's illegal in England to build a rope-&-tire swing?

Well give the EU time and it will be.

I thought you were making it to hang Blair on, and now I read it again I see you weren;t.

Sorry, I've got two Conversations going on in my head at the same time and it's been this way for the last few days; I'm not thinking straight anymore.

Maybe I should get into deadpan humor. My jokes don't get laughs but my straight lines do. 😕

Same here...wait I get laughed at regardless. 😕 😯