He has said this in the past but he also said it today [06 March 2010] but with so much power and anger, he was deleted by moderator pissed. this is pretty much for people that havent heard this. 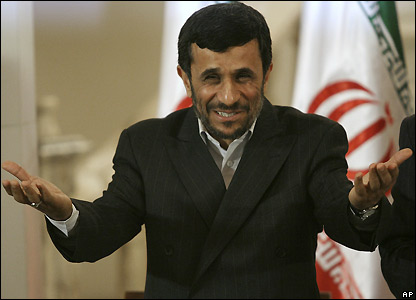 Iran's hard-line President Mahmoud Ahmadinejad cast doub over the US version of the Sept. 11, 2001 attacks, calling it a pretext used to invade Afghanistan and Iraq.

Though Iran has condemned the al-Qaida attacks on New York and Washington in the past, this was the third time in a week Ahmadinejad questioned the death toll, who was behind the attacks and how it happened.

"Four or five years ago, a suspicious event occurred in New York. A building collapsed and they said that 3,000 people had been killed but never published their names," Ahmadinejad told Iranians in the holy city of Qom.

"Under this pretext, they (the US) attacked Afghanistan and Iraq and since then a million people have been killed only in Iraq," said Ahmadinejad in the speech broadcast live on state-run television.

On the last anniversary of the attacks, the names of 2,750 victims killed in New York were read aloud at a memorial ceremony there.

Last year, Ahmadinejad raised questions over the September 11 attacks, saying "what caused it, what were the conditions that led to it, who truly was involved" needed to be examined.

In the past, Ahmadinejad has said that the attack was "a result of mismanaging and inhumane managing of the world by the US" and it should not be turned into another Holocaust and "be used for slaughtering people."

Although Iran has condemned the US invasions of Afghanistan and Iraq, the campaigns toppled the Taliban and Saddam Hussein, two regional threats to Iran.
- i took this article from endtimesworldnews

The way you act it seems you are one of the few who still believes the fairy tales the gov spun on their demo jobs of prime real-estate.

If any government is spinning fairly tales, its Iran!

"greeney2" wrote: If an government is spinning fairly tales, its Iran!

You only use the word 'an' when the next words starts with a vowel. 😉

slip of the finger! opps!

Somehow, Mahmoud reminds me of a used car salesman that used to be in San Bernardino. For the life of me, I can't imagine why...

"Would you like to buy a stereo? Its good, Sony guts. Half price. How bout a watch? Its a Rolex, really."

Haven't we already killed off all the people running al Qaeda by now? I mean, damn! Pretty soon they'll have to start looking on Mars. 🙄

No when he was talking he was doubting that it happened what he is saying is IF September 11th attack did happen this would be his view, he says people were never in the buildings, both buildings were empty... how is their nothing wrong with that mael?