Bombing the Iraqi People to Death

A laundry list of detail complete with security failure after security failure which leads to many deaths of the innocent. One has to wonder how a Country can become such a place while the Worlds most powerful Entity stands watch.

Major attacks this year aside from the most recent death totals:

_ Aug. 19 — A double truck bombing in Baghdad kills 65 at the Foreign Ministry and 28 at the Finance Ministry. Two other bombs, including one near the Health Ministry, kill 8. More than 500 are wounded in the attacks.

_ Aug. 7 — A suicide truck bomb targets a Shiite mosque in a northern suburb of Mosul, flattening the mosque and killing at least 44 people. The attack also injures more than 200 people. Bombings against Shiite pilgrims in Baghdad kill seven.

_ May 20 — A parked car bomb explodes near several restaurants in northwest Baghdad, killing 41.

Poor people " INSURGENTS " having access to Military grade explosives- How? 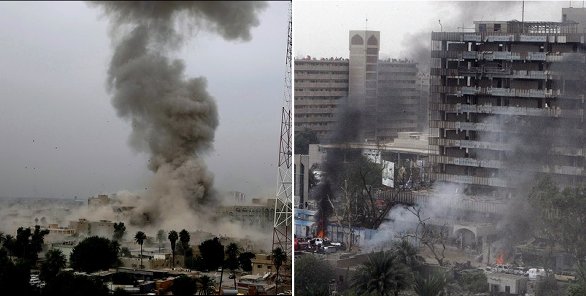 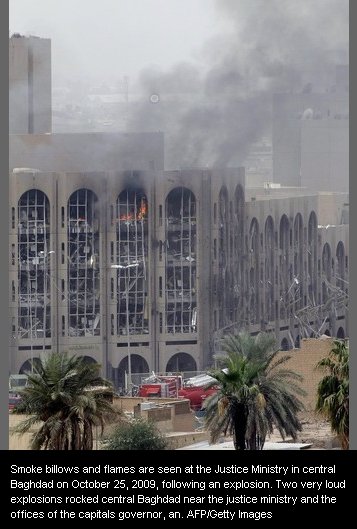 And of course death: 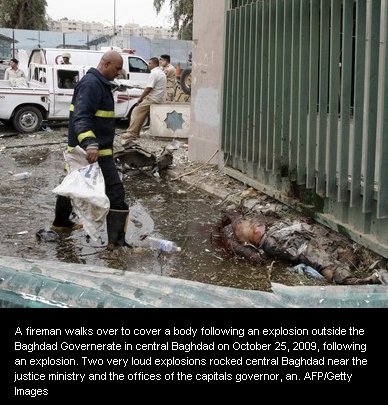 Damage that indicates the size/scope of the blast-blasts.

So one can ask why this didn't/doesn't garner more air time in the West/USA?

Credit Fintan Dunn @ BFN He's done an EXCELLENT job of covering both Iraq and Afghanistan and I for one appreciate his efforts.

The Link and it's entire content:WARNING Not for the faint of heart:

Isn't this just unbelievable. My mind at the moment can't wrap around that two blasts can create this much damage.

The BBC has some live footage as well. It has no sound though. I'm actually looking for the video with sound taking with a cell phone.

Just reading the list you posted it seems to be quite lively over there. The fact that we aren't reporting much from over there can only be a political move. I don't watch the news at all but just from hearing people around me seems Afghanistan is a big focus/Obama. Doesn't that just make you go....hmmmmmm....

Thanks for posting the thread.

Truth is stranger than fiction, because fiction has to make sense.

Nice pictures, they had stories to go with them. Written by reporters working for little unheard-of outfits like UPI, AP, CNN, et cetera... as do the photographers that TOOK those pictures.

These latest tragedies have been all over the news for days, how much more air time do you want to give them? 🙄

Now let's look for an excuse:

Iraq has arrested more than 60 security force members, including 11 senior officers over Sunday's twin suicide bombing in the capital Baghdad.

Those arrested include the commanders of 15 checkpoints near to where the attacks took place.

The attack in which more than 150 people were killed and 500 injured was the deadliest in Baghdad for two years.

Correspondents say the scale of the bombings raised new questions over the competence of Iraqi security forces.

Anything to justify keeping US forces on the ground in country. Hell these US NATO Trained POLICE ain't worth sheep shit! 🙄

WAKE UP PEOPLE-- A group tied to AL_K_DAH claims responsibility. 🙄 🙄 Do there wear dresses?

A militant group linked to al-Qaeda, Islamic State of Iraq, said on Tuesday that it had carried out the attacks in a claim that could not be independently verified.

Sunday's co-ordinated attacks near the Baghdad governorate headquarters and the ministry of justice came as Iraqi MPs were in deadlock over the rules governing next January's general election.

The Iraqi parliament has until 31 October to break the deadlock, with differences between Arab and Kurdish factions centring on the disputed northern oil city of Kirkuk.

It is feared that attacks will become more frequent as militant groups attempt to destabilise Iraq in the run-up to the elections.

US President Barack Obama said he was outraged by the bombings.