Yesterday, Hillary Clinton was asked a question by a reporter confirming whether she 'wiped' the server clean of it's data to hide evidence. Her response? "What? With a cloth or something?" She then awkwardly chuckled.

Does anyone else find it strange that she was wearing an all orange getup when speaking about this? 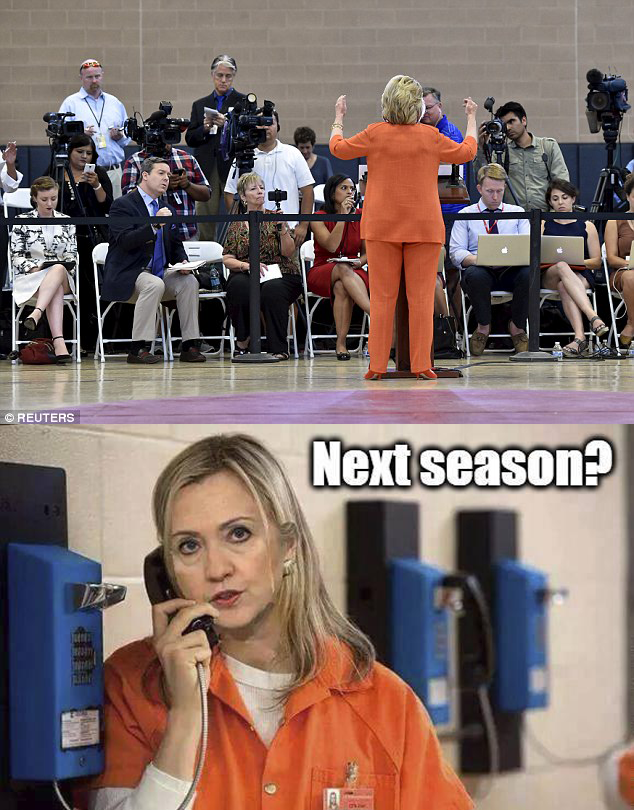 However, I do think this public pressure will end up very similar to Nixon, where she will be forced to just drop out of politics, which will be what they want her to do, and avoid trials.  I is very possible like Bill, who was not proscuted, but he was disbarred as a Lawyer for Pergury.  What do they care, they are never going into law again.

I think in a few months Hillary will drop out of running if not before. You will probably love her parting comments when she does.  Bengahzi, the coverups, and her foundation could end her political career.  If they audit their foundation, it could be a fine line of income tax evasion, but they will just make them pay back taxes if they disallow how they did it.

As much as I dislike Hillary, the other candidates are worse. Be careful what you wish for. Having said that, others have gone to prison for less. She actively hid secret communications on her personal email server, in the bathroom, yikes. And the stupid comedy news talking heads keep acting like it's just email.  They have no concept or concern for national security.  This is why most libs are not qualified for high office. Who knows what she'd do as president.

According to a recent interview with Edward Snowden...he claims Hillary committed espionage crimes far worse then he. Even General Petraus pleaded guilty to a misdemeanor for mishandling classified material.

If any other State Department or CIA employee were using a private email server to send details about the security of embassies, as Clinton is rumored to have done, as well as sensitive meetings with private US government officials and foreign officials over unclassified email systems, “they would not only lose their jobs and lose their clearance, they would very likely face prosecution for it,” the NSA whistleblower said in an in and interview.

I am no attorney, so I will put aside my political bias and say I do not know about jail time.

I will say, it should truly jeopardize her ability to run this country. To send classified emails from a personal server stored in a closet, vs. the immense cyber security measures our government implements is a sheer sign of stupidity.

Plenty of people should see jail time. What Europe saw in the aristocracy we see in our political families and famous elites.

Yes send her to Jail, Bernie needs her votes. I have always been a supporter for the Clintons, however I concede. Hilary and Bill have done more damage than possibly any politicians in the history of politics throw them both in there! haa

Does Hillary deserve jail time? Yes. I don't know what to think about the email situation except I'm bloody fucking tired of hearing about it. Why the fuck would someone use a personal and private email server that is used to pass around any classified information, if said documents were even passed back and forth using this server. Sure, you can use an operating system such as linux to run this computer system but in reality no system is ever truly bullet proof. if she doesn't see any jail time for this, she should do some time for robbing and murdering the working class with the absurd laws that she and her husband bill have managed to get signed into law that's stolen wages from the working class, in particular women, and denied us a single payer universal healthcare system.

In reality, I don't care if she does prison time or not just so long as she keeps her face and presence away from any government body. her whole regime has destroyed the working class and the poor and lifted the rich and made corporations more powerful than ever.

I think it is really strange. thepiratebays.se