Mystery around George W. Bush 'Miss me yet?' billboard!

The Internet has been abuzz with rumors that if you drive down Interstate 35 near the town of Wyoming, Minnesota, you'll see a billboard bearing the image of a smiling George W. Bush accompanied by the question "Miss me yet?" The online rumors were confirmed by this image:

Many initially thought the picture was a hoax created through Photoshop. But now multiple people have confirmed its existence. The mystery surrounding the billboard quickly morphed from a "Fact or Fiction?" story into a genuine "Whodunit?" Who paid for the ad, and what was their motivation? Are they Obama supporters sarcastically hoping to remind disgruntled liberals about how things were under Bush, or are they Bush supporters sincerely hoping to remind voters of the past administration?

To get some answers, Yahoo! News tracked down Mary McNamara, the general manager at the Minneapolis office of Schubert & Hoey Outdoor Advertising, the company which owns and leases out the billboard space.

"The ad was purchased by a group of small business owners who wish to remain anonymous," McNamara said. However, McNamara did offer this political bombshell: "Some of the people in the group who paid for this were Obama supporters."

McNamara told us that the message the group hoped to convey was one of "Hope and change, where is it?" She went on to say that she has yet to receive any negative feedback about the ad, which has been up for about a month, and added that some have even contacted her office offering to donate money to keep it up.

However, not everyone is buying McNamara's portrayal of the group's ideological makeup. Cindy Erickson, the chairwoman of the Democratic Party in Chisago County, where the billboard is located, suspects the ad's funders are conservative activists posing as Obama supporters.

"I don't have any idea who did it, but my thought was that they're Tea Party people," she said. "Regardless, it's been the subject of many conversations around here."

While Minnesota has long been a blue state, Chisago is part of a Republican-leaning string of suburban counties surrounding Minneapolis and St. Paul, and Obama lost the 2008 vote in Chisago by 10%. But Erickson argued that local Democrats who voted for him are content with the job the president is doing. She added that if the intent of the ad was to reflect poorly on Obama, then it's failed to deliver its message.

"I think most people have interpreted their message to be 'If you think it's bad now, don't forget how bad it used to be,'" she said. "It's just a goofy photo of him. It's goofy."

Yahoo! News' attempts to get a comment on the billboard from George W. Bush's representatives were unsuccessful.

-- Brett Michael Dykes is a contributor to the Yahoo! News blog

You forgot the image greeney....now that's a must 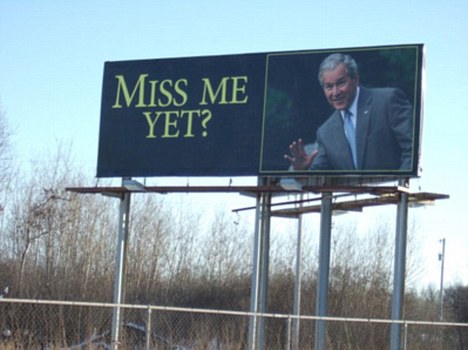 Truth is stranger than fiction, because fiction has to make sense.

Thanks Inja--I don't know how to do an image. Need to have John teach me.

Just curious, how much did that billboard cost you Inja?

Probably isn;t too far off for a lot of people.

Why does that picture remind me of Eminem's Kill You?
"You don't want to F with Shady, cause Shady, will F-ing kill you."
"Vicadin, vin, vin, vinnnnn"

Of course you can replace "Shady" with "Barry". Or "Emanuel". In fact Barry rappin this song fits perfectly.

Bi*ch I'ma kill you! You don't wanna F with me
Americans neither - you ain't nuthin but a slut to me
Bi*ch I'ma kill you! You ain't got the balls to beef
We ain't never gon' stop beefin, I don't squash the beef
You better kill me! I'ma be another prezer dead
For poppin off at the mouth with $hit I shouldn't a said
But when they kill me - I'm bringin the UN with me
[chorus]
You don't, wanna F with 'Manuel, cause 'Manuel, will F-ing kill you

It's a classic psyop, or it was. I'm very surprised you don't see through it. It's a veiled attempt to gauge just how connected or tuned in people really are, do they really care--ETC. Obviously if one can't grasp the intent how could they ever really give a damn.

Obama is/was CIA---His first job was as a so called consultant for one of their front companies--it's all been beaten to death.

Another hand picked, conditioned, and groomed politician--like most all of them are!

I've been silent for a while now--waiting for something new to appear--so far it's the same old story--same old song and dance. I don't listen because when I hear Obama speak I get sick to my stomach. It's pitiful how damn dumb the average person really is these days. I continue to be amazed at that fact.

I'll bet there are lots of people missing GWB given the current circumstances.