"The Department of Justice will recommend that Ferguson police officer Darren Wilson not be charged with any federal civil rights violation in the shooting of black teenager Michael Brown.

The New York Times reports the DOJ is in the process of drafting the recommendation after an FBI investigation “found no evidence to support civil rights charges against the officer.” However, the Times notes that Attorney General Eric Holder has not made a final decision yet. Holder is expected to reach a decision before he leaves office in the next month or two.

A St. Louis County Prosecutor announced in November that there would be no state charges brought against Wilson. That decision and the actions of prosecutor Robert McCulloch were heavily criticized, especially by the left."...

"...before he leaves office in the next month or two."
What's that all about? He just hangs around until an, apparently, undetermined date?

"History records that the money changers have used every form of abuse, intrigue, deceit, and violent means possible to maintain their control over governments by controlling money and its issuance." - James Madison

I expect Al Sharpton and Eric Holder to both issue a public statement of apology to this officer who left the police force, completely had his life derailed, and forfeited all pensions and benefits, leaving his dream of just being a policeman. All because of a little punk who thinks he is above the law, pushing and shoving a smaller Indian man, stealing from him. Lets call it like it really is, this black hoodlum is the racist picking of someone smaller and of Indian decent, not the white policeman who happens upon him strutting down the middle of the street and giving an attitude to the cop wondering why.

I think an apology from President Obama is also in order, having vilified this policeman and branding the shooting as something it was not. Don't forget the defiant father screaming "Burn the bitch down".

Of course it isn't final until A.G. Holder makes his decision, but it would be quite bizarre for him to bring charges now that nothing has been found by the FBI. The whole thing seems surreal in the aftermath. Destructive furor whipped up by race hustlers and the enabling msm amid an atmosphere of social justice rhetoric. They absolutely should apologize which would go infinitely further towards conciliation and communication than antagonistic racial posturing and anger inciting exclamations. Then something good might come from Michael Brown's death and Darren Wilson's ruined life. We both know how likely that is to happen.

"History records that the money changers have used every form of abuse, intrigue, deceit, and violent means possible to maintain their control over governments by controlling money and its issuance." - James Madison 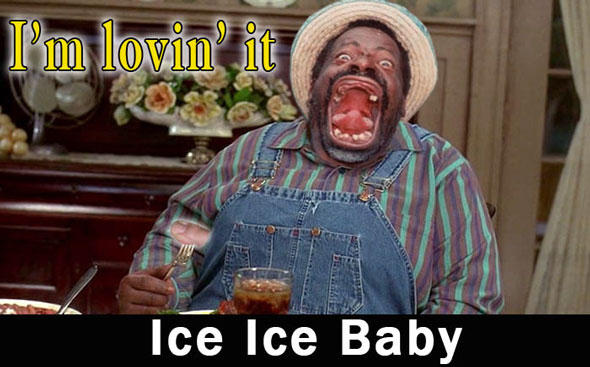 Looks like this is just turning into a lot of racist cartoons, maybe should be put into the racial forum.

If any of the political cartoon posters would like to add something actually written, please elaborate about the "hands up, don't shoot", why it is still being said as if it were not a lie?  It never happened and it was a complete fabrication. Any thoughts?