A comet has been captured by Nasa being 'eaten' as it flies too close to the sun.
The space agency's solar-focused agency - Solar and Helioscopic Observatory (SOHO) - captured footage of the Kreutz Sungrazer as it made its fateful approach.

The footage has proven popular on YouTube and scientific and astronomical websites and blogs.

Kreutz Sungrazers are characterised by orbits taking them extremely close to the Sun.

They are believed to be fragments of one large comet that broke up several centuries ago and are named after German astronomer Heinrich Kreutz, who first worked out that they were related.
A SOHO spokeswoman said the agency gathered the footage using a Coronagraph, which blocks the brightest object in an image.

This allows activity around the sun - such as the comet's approach - to be viewed.

It is known as a 'false eclipse' and displays the actual footage of the comet's final seconds, presented in a way that it can be seen by the naked eye.

Hundreds of Kreutz comets, some only a few metres in diameter, have been discovered since the launch of the SOHO satellite in 1995.

Like the comet captured in these images, none have survived the section of their orbit closest to the sun.

Experts say a new cluster of Kreutz comets will approach the sun over the next few decades, treating stargazers to more spectacular shows. 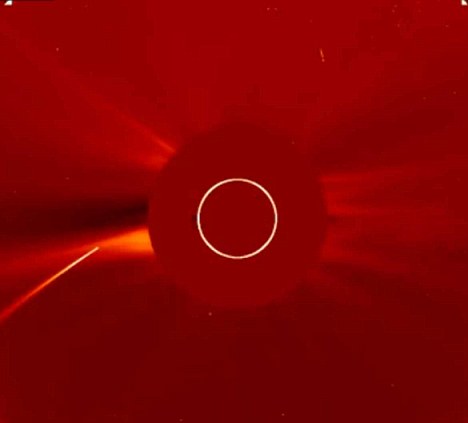 Wow! That was quick!