Have you ever heard about Planet X ?

One of my student send me this video...Sorry it's in french, but I think anyone can understand with the images and photos.

The planet X would be a planet wich should pass near the Earth, and that the governments hide, it would come nearer and nearer, and would create lots of problems on Earth. The government would have built bases, some kind of underground tows for some human beings to survive...

This planet would be the reason why there are lots of storms and hurricanes, and it would be too the origin of the global warming.

John, is there any file you would know about this planet X ? they say the governments hide it , just like so many things...they also say that scientists who wanted to tell the truth had problems, were stopped in their works, or even lots of them died.

Don't know at all if there is something credible about this Planet X?

Maybe it could explain lots of things.

Thank you for any advice...

This is from the Leak Project which covers the Science Daily article.

Hopefully, this clarifies the situation.

Here is the link for the Science Daily article:

Quoting from the article:

Is there also a Planet Ten?

De la Fuente Marcos explains that the hypothetical Planet Nine suggested in this study has nothing to do with another possible planet or planetoid situated much closer to us, and hinted at by other recent findings. Also applying data mining to the orbits of the TNOs of the Kuiper Belt, astronomers Kathryn Volk and Renu Malhotra from the University of Arizona (USA) have found that the plane on which these objects orbit the Sun is slightly warped, a fact that could be explained if there is a perturber of the size of Mars at 60 AU from the Sun.

"Given the current definition of planet, this other mysterious object may not be a true planet, even if it has a size similar to that of Earth, as it could be surrounded by huge asteroids or dwarf planets," explains the Spanish astronomer, who goes on to say: "In any case, we are convinced that Volk and Malhotra's work has found solid evidence of the presence of a massive body beyond the so-called Kuiper Cliff, the furthest point of the trans-Neptunian belt, at some 50 AU from the Sun, and we hope to be able to present soon a new work which also supports its existence."

This is the latest video from the Leak Project:

Thank you Bob for these informations...it seems to be clear! this planet or this "massive body" would be real!

This is always very hard to see where is the truth...there are people and scientists who say this is real that is true, and others who will say that it isn't.

Everyone of us has to try to conclude our own advice, with all these informations. 🙂

Even as the count of known planets around other stars continues to climb, a small group of observational astronomers and dynamicists are fixated on something much closer to home: tantalizing clues that a super-Earth-size planet lurks undiscovered somewhere beyond the Kuiper Belt in our own solar system.

Some have dubbed it "Planet X," others "Planet 9," and right now observing teams are using some of the world’s largest telescopes in a race to track it down. One big problem is that they’re not sure where to look — or if it even exists.

(Debunk - Holocaust/Ethnic Cleansing, is the Historical Mechanism to Mend, Science and Religion) 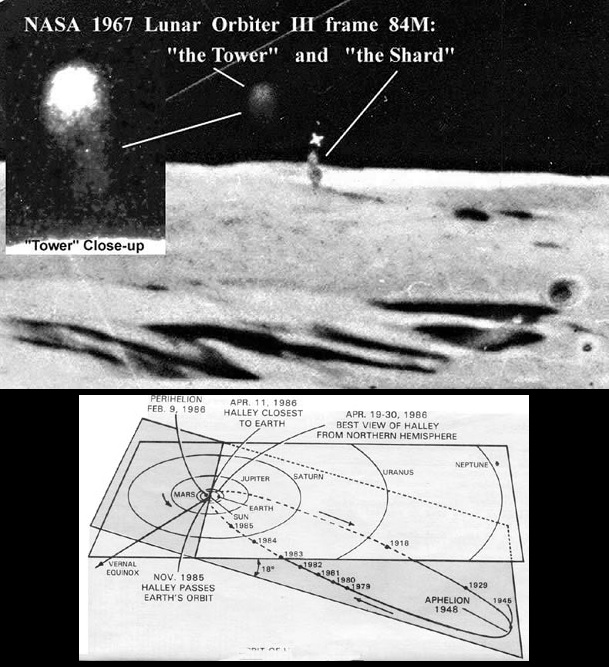 Nguyen Van Lem 1967/1968, when, they blew out his brains.  Halley's Comet, blew up into the size of a planet.  The Picture from Nasa, shows the correct geo-positioning of Halley's Comet from the Earth's Moon.  In a Diagram that matches the year, below it.

Earth's Moon is the traditional mechanism God has used for the "True Unified Field" with this earth, God stopped wrestling with "dead work and dead flesh", thousands of years ago for that argument.  You won't have activity that identifies with the "Seed Populations for the New Earths", until you kill a considerable number of people, ethnics and jews. (probably more).

You can kill and dispose of every jew and ethnic globally.  That is your law.  Right now you are still allowed global suicide in your suicidal pleasure with me.  However, I will illustrate God's Mercies to the degree he fashions, to denote a possible better and cleaner way to genocide, with God willing, in providing the opportunity, that much has not changed.  Right now, you are falling behind in your understanding.  (In terms of Genocide, God has to give to me the strength, to illustrate euthanasia of jews and ethnics according to my decree, and that seems less likely when you become incapable of doing anything to me in your suicide.............but for now...............genocide has not mended the relationship of science and religion, all you have so far is 9/11/2001, you don't have nuclear detonation in the usa, so there are levels of pain before you death becomes clearly, as we settle this problem of authority once and for call, around 12/21/2020) (the last 153 days of daniel's final week)

(with that said, you cant disturbed my prayer with god in your incest/rape/murder.  when you do, at this stage, nothing happens from me or from god's mercies, since that requires an action from god.  you can kill indiscriminately, the jewish people and the ethnic people, you will have no further point of discernment, as we continue to see what is necessary, but for now.  God still kills and drive them away in their suicide with me) (as we continue to settle this problem of authority once and for all time)