No longer a conspiracy theory: MIT scientists confirm they possess technology to beam voices into your head

(Natural News) A crackpot theory no more, scientists from Massachusetts Institute of Technology just revealed they now possess the technology to beam voices into your head. For years , the mainstream media has been poking fun at anyone who actually believed the “powers that be” are desperately trying to usurp control over humanity — but some of the latest technological developments are clear indications that a totalitarian regime is brewing on the horizon.

At long last, scientists are now revealing the first wave of technology that could soon be used to bring the world at large to its knees. In 2018, we saw warnings of “pre-crime” policing systems come to pass, and video surveillance technology become more and more advanced.

Now, Massachusetts Institute of Technology (MIT) researchers say they have developed the technology necessary to beam voices right into your head. What could go wrong?

Putting thoughts into your head

Scientists from MIT have found not one, but two ways to transmit sounds directly to an individual’s brain via laser beam. A paper on their exploits was published in the journal Optics Letters in January 2019.

In a press release, researcher Charles Wynn said, “Our system can be used from some distance away to beam information directly to someone’s ear.”

“It is the first system that uses lasers that are fully safe for the eyes and skin to localize an audible signal to a particular person in any setting,” he added.

As Futurism reports, a material’s absorption of light can actually produce sound waves. This is called the “photoacoustic effect,” and both methods of sound-beaming technology rely on it to transmit tones, music and recorded speech via laser.

The MIT scientists used water vapor as their “material.” One of their chosen techniques was to “sweep” a laser beam at the speed of sound. By changing the lengths of the sweeping motion, they were able to “encode” different sounds.

As reported by Futurism:

This technique allowed them to transmit sound to a person more than 8.2 feet away at a volume of 60 decibels — about the loudness of background music or a conversation in a restaurant — without anyone between the source of the sound and the target hearing it.

The scientists also tried adjusting the laser beam’s power to encode a message. The team reported that this method produced a clearer response with lower volume.

A dangerous leap into the future

It is no surprise that proponents of this new technology are already promoting its virtues to the public. As usual, the powers that be are promising that the voice-beam technology will be used for “good” instead of evil.

While the MIT scientists say they hope to see the technology used to assist in dangerous situations, researcher Ryan M. Sullenberger disclosed that they also plan on commercializing their tech.

“We hope that this will eventually become a commercial technology. There are a lot of exciting possibilities, and we want to develop the communication technology in ways that are useful,” Sullenberger commented.

This voice-beam technology could be very useful for a variety of purposes — but that doesn’t mean it will be used for things that are “good” for the average person.

While this voice-beaming technology is an undeniably impressive feat, the fact remains that there are probably more “bad” uses for this technology than “good.” MIT researchers say it can be used by authorities to communicate covertly in delicate situations — perhaps during a school shooting event, they propose — but beyond a select few instances, it’s hard to imagine how mass commercialization of this technology is going to be possible without putting the freedom and privacy of the public at risk.

This kind of technology sets the stage for a number of unintended consequences — whether it’s having advertisements sent directly to your brain, or full-blown mind-control, it is painfully obvious that in the wrong hands, voice-beam technology can be used for a number of corrupt purposes.

See more coverage of the latest developments in mind control technology at MindControl.news.

Sources for this article include: 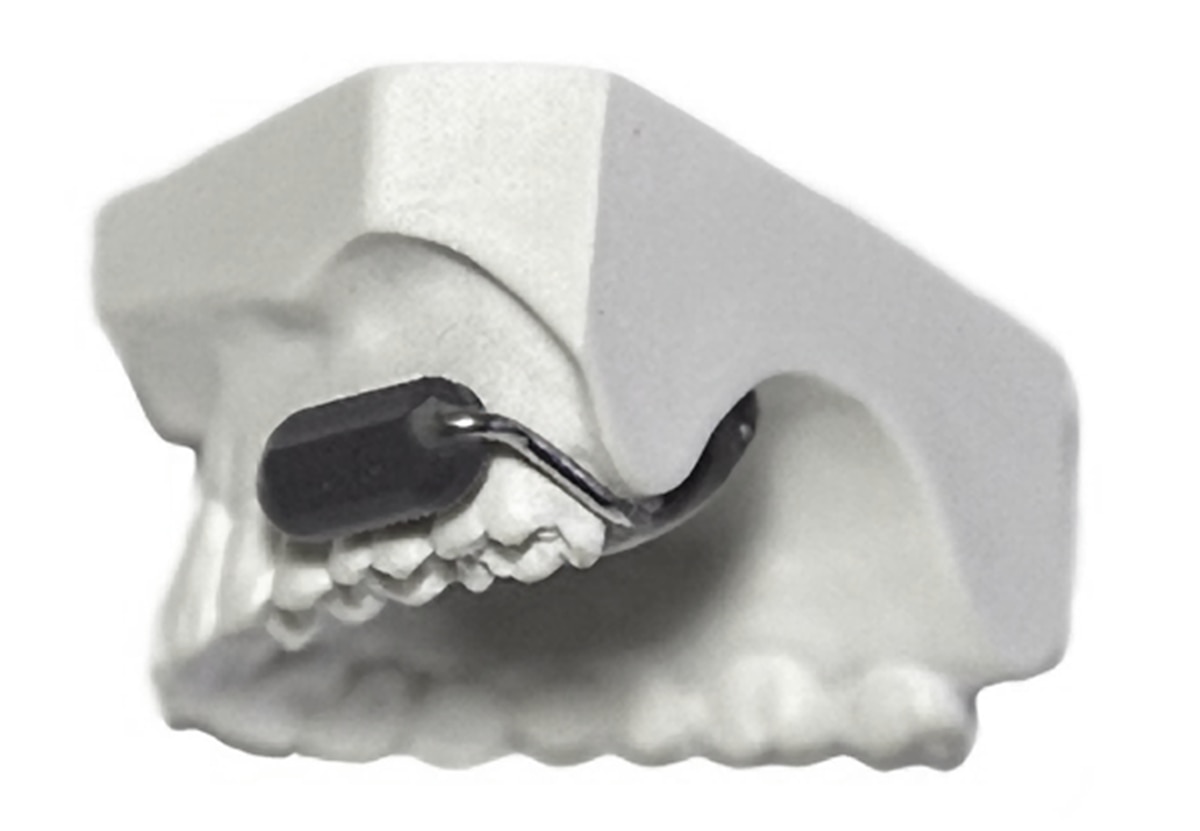 There’s a new wireless communication device, but it doesn’t go in your ears.

California-based Sonitus Technologies is working with the Defense Department to implement the Molar Mic, a miniaturized traditional headset that clips to a user’s back teeth, according to the news release.

The device ditches the need for ear pieces, microphones and wires on the head.

The custom mouthpiece clips onto the user's back teeth and contains a tiny microphone and speaker-transducer for hearing, the company said. The device uses the teeth and jawbone as a new path for hearing.

Molar Mic is supposed to help communication continue even in extreme conditions that might normally break down radio communication between troops. By placing the device on the teeth, it uses the person’s body to block external noise while reducing gear weight on the user’s head.

The Defense Department contracted Sonitus Technologies for a multiyear, $10 million deal to finish development of the Molar Mic, according to the company and Defense One.

The DOD, via its Defense Innovation Unit (DIU), has contracted Sonitus for a multi-million dollar, multi-year agreement, to complete development of the Molar Mic for purposes of transition to Fielding and Deployment of the system upon successful conclusion of the first segment of the contract which is funded by the U.S Air Force. Subsequently, other qualified branches of the U.S. defense community may leverage the technology as part of the DOD’s program to enhance communications capabilities and operational safety of its personnel. Sonitus was introduced to the DOD by In-Q-Tel, the not-for-profit strategic investor that identifies and partners with startup companies developing innovative technologies that protect and preserve U.S. security.

“Sonitus Technologies is honored to bring this game changing technology to our country’s elite military, making them safer and more effective by enabling them to communicate clearly – even in the most extreme situations,” said Peter Hadrovic, CEO of Sonitus Technologies. “The voice interface sustains communications in dangerous and challenging environments. The Molar Mic is the first in our family of solutions that conventional approaches are unable to address.”

Pararescuemen (commonly known as PJs) from the Air National Guard 131st Rescue Squadron based at Moffett Field in Mountain View, CA, participated in early field testing of the Sonitus prototypes, including rescue operations during Hurricane Harvey last summer in Houston.

“The ability to communicate by radio is crucial for our mission,” said a PJ and DIU Warrior in Residence. “It enables us to execute in extreme conditions and save lives. But despite having amazing technology, communication still commonly breaks down because of the extreme environments where we operate.”

In one case during Hurricane Harvey, a PJ was involved in airlifting an injured civilian into a helicopter hovering directly overhead and was attempting communication with the helicopter flight engineer and pilot using the Sonitus system. The crew was amazed that they could clearly hear the PJ in these conditions.

Parachuting from high-altitude aircraft, working under a hovering helicopter, swimming in open water, and similar conditions, interfere with traditional communication devices precisely when they are needed most. What is needed is an entirely new approach.

Sonitus Technologies uses a patented audio interface and near-field magnetic induction (NFMI) technology to achieve its performance. The recent award followed DOD-funded field-testing of prototypes by military personnel from all of the major service branches with extensive field experimentation. Testing included multiple scenarios, with and without personal protective equipment, all with extreme noise and without loss of communication.

The Sonitus solution creates a unique wireless audio interface by embedding both a tiny microphone for talking and a speaker-transducer for hearing in a compact custom-fit mouth-piece that snaps comfortably around a user’s back teeth. This allows the user to both talk and hear without external devices attached to the head. The placement on the teeth uses the body itself to block external noise when speaking and leverages the user’s teeth and jawbone to create a new auditory path for hearing. The result is an unobstructed head and face, clear communication, higher comfort, enhanced situational awareness and the ability to add or remove personal protective equipment without breaking communication.

Security personnel, first responders, and industrial workers such as those in the energy sector are evaluating the Sonitus solution for their market applications.

For more information about the Sonitus wireless personal communication system and its technical specifications, visit how it works.

Sonitus Technologies is the developer of miniaturized wireless personal communication solutions designed for use in harsh commercial and security environments. Developed with, and proven by, the world’s most demanding customers, the Sonitus solution sustains two-way voice connectivity in communication networks critical to personal safety and performance across defense, public safety, aerospace, power, oil & gas, and professional applications. The patented two-way Sonitus solution is a new audio interface – using near-field magnetic induction (NFMI) technology – which makes voice communication immune to a user’s operating environment and decouples it from protective equipment. A small wireless, hands-free, ears-free device clips to a user’s back teeth and creates an unbreakable personal communication link for speaking and hearing that is compatible with existing radio, phone or intercom solutions. The new audio path eliminates the need for ear pieces, microphones and wires on the head. Initial investors in Sonitus include In-Q-Tel, Panasonic, KCK and Tsuha. The company is based in San Mateo, CA, and is led by a team of proven executives from within the technology, government and medical device markets. For more information visit http://www.sonitustechnologies.com.

DIU is an entity within the Department of Defense charged with accelerating and streamlining the process by which commercial technology is sourced and integrated across the U.S. military to ensure our national defense. For more information visit http://www.diux.mil.