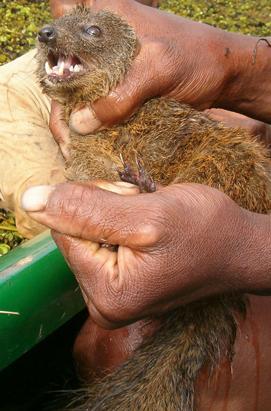 A small mongoose-like creature found in Madagascar is the first new species of meat-eating mammal discovered in 24 years, scientists said. The cat-sized carnivore, known as Durrell's vontsira, was identified by researchers with the Durrell Wildlife Conservation Trust, the Natural History Museum of London, Nature Heritage and Conservation International. Scientists say the small mammal, which weighs about one pound, is likely one of the most threatened carnivores in the world. (Courtesy © Durrell Wildlife Conservation Trust )