"Time, Times, Half a Time" (33 and 3 Days, Division of Revelation's Seven Years) 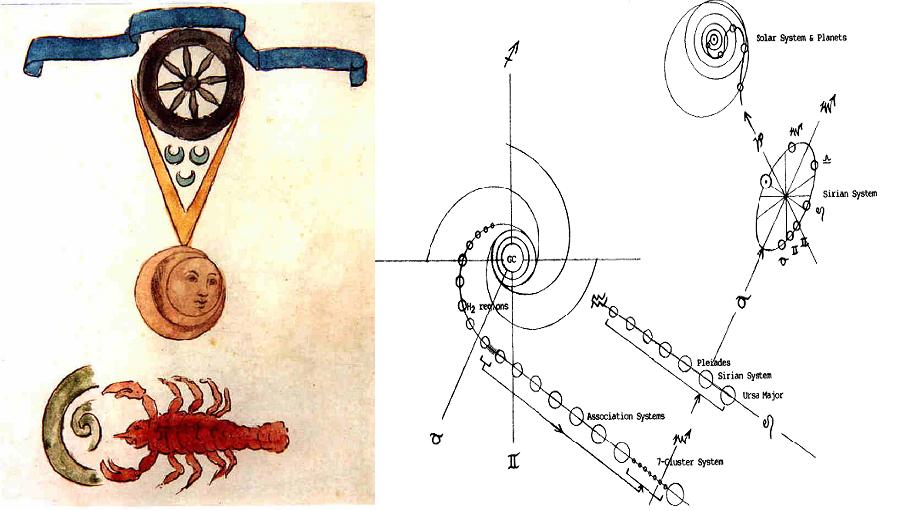 Nostradamus Lost Plate 70, shows us Two Tetrahedrons, the one on the Bottom is the Pleiades.  Now the one on the top is our Earth's Sun.  This is "Nibiru/Star Wormwood" initial position and its current resting place.  In otherwords, we see "33 Degrees of Pleiades, for 33 Degrees of our Sun's Differential Pole", to mark the Seven Rays of Nibiru or the Seven Years of Revelation.  We've covered this conclusion in detail based on the following principle: (Nostradamus follows the Galactic Alignment and Eclipse of the Sun by our Moon, as absolute indicators of when God will activate the Tetrahedrons associated with Revelation, this conclusion is secondary, we've also covered this in detail in a previous discussion):

(this is only a preface, but I want to help you see past the mental illness the christian community is parading, by promoting their version of resolution, which does not include any form of judgement, so you need to see the larger association to what's happening first, and in brief)

(5. (no number 5, only some clarity), God classifies himself as "Seven" to denote his usage of energy, and Daniel Classifies this behavior as "70x7", God's Mercies are invalidated based on INRI, but he may use some measure of mercy to answer man, via a higgs boson..............There has always been only four contradictions, but there are many other lesser contradictions that only provide detail about the primary four in the gospel's law)

The difference between the figures of the Old Testament and the New Testament in Answering the Four Contradictions of the Gospel's Law, identifies with the Difference between God's Declarative Will (Blasphemy against the Holy Spirit), and God's Permissive Will (Lamb Slain before the Foundation of the Earth)............This difference Translates into the division of the Gospel's Law, that is illustrated with "Water" and with "Blood", so this translates into the timetable of and for the events of revelation.

(God's Law and the Antichrist, does not develop into becoming a Scapegoat for your sin, or placation to substitute the division of man by reason of your own generational sin, INRI with the Non-Christian Community is defined by your usage of force against me surrounding the truth about the Higgs Boson...........INRI with the Christian Community is defined by your usage of force surrounding the 70 Weeks of Daniel that is clearly defined as the 70 Sons of Man in the Gospel of Luke, you do not have a legal right to God's Mercy, based solely in your pleasures, generationally, and today of state and church funded Incest/Rape/Murder of my body, that is the law) (the Effects of Joseph the Blessings and the Sign of Divorce, can take the Form of the Higgs Boson, taking the appearance of a man-man-gospel to challenge your walk of faith in the elimination of Genetic Dan, in order to produce a Sign of Divorce ... that is one likely outcome, probably the most likely) (End of Preface in Parenthesis)

"Times, Time, Half a Time" (Several Answers, One Law)

DANIEL 9:24 Seventy weeks are determined upon thy people and upon thy holy city, to finish the transgression, and to make an end of sins, and to make reconciliation for iniquity, and to bring in everlasting righteousness, and to seal up the vision and prophecy, and to anoint the most Holy.

DANIEL 9:2 In the first year of his reign I Daniel understood by books the number of the years, whereof the word of the LORD came to Jeremiah the prophet, that he would accomplish seventy years in the desolations of Jerusalem.

DANIEL 12:11 And from the time [that]the daily [sacrifice]shall be taken away, and the abomination that maketh desolate set up, [there shall be]a thousand two hundred and ninety days.

REVELATION 11:9 And they of the people and kindreds and tongues and nations shall see their dead bodies three days and an half, and shall not suffer their dead bodies to be put in graves.
REVELATION 11:11 And after three days and an half the Spirit of life from God entered into them, and they stood upon their feet; and great fear fell upon them which saw them.

When God kills me for 33 Days from 8/21 to 9/23, he will also justify his gospel's law against INRI, that means, when God decides not to euthanize humanity, he will kill the enemies of my Testimony, that means North Korea, United Kingdom and the USA, will be killed by degree, and perhaps some other places....................You will have 33 Days to kill Genetic Dan's Population Cluster, until God acts on his decision, until you die.

42 Months from Flight 370, I will be killed for 33 Days, "Three Days and a Half of Seven".  After that is finished, you will likely have to kill Genetic Dan to reveal the Sign of Divorce, but I should have the Black Knight Satellite, I will use that to educate the White Populations Globally, I will use public parks or remote areas, and I will use genetic filters in a radius within the areas of my choosing as we've discussed.  There may even be an off world expedition after things go underway, God places his mercies in my power to illustrate his will, so that is what I will do.  Love and Blessings. (Nightly Walk Tonight, and 10 Hour Walk Tomorrow, to keep the Ethnic People Tamed, based on this level of truth). 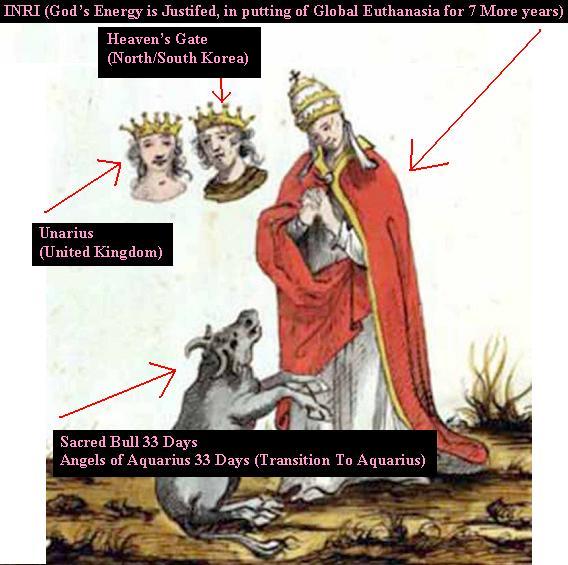 First, your lives are expendable, they are not important.  Secondarily, the United States of America is not Pictured as being "Beheaded".  Unless you can use these people, to do more against me, its doubtful I can have their lives, taken with yours.  Now, INRI, since you are still using lethal force against me.  I've asked God to take your lives immediately on 8/21 when this sequence begins.  I don't want you living to cause trouble, you can use ethnic people to pleasure yourselves with me in the mean time, and I'll help keep you blind.

(Thirdly, you will likely have Seven More Years, perhaps with nothing from God, or from me directly or indirectly.  As your lives come to a close, the best thing you can do is continue to use lethal force against me.  Everything I've seen to day is good and I want to see more, approaching 8/21)

(The Moment God gives me anything, rest assured, the wave of mass murder will begin almost immediately.  But I want to keep the global suicide option open as much as possible so you need to use the authorities and corporate, to keep the ethnics blind and reassured.  They will have no part in God's Mercies, but, you need to make up the difference to keep your pride.  I believe this is necessary, so you can bide your time to develop an effective kill solution for the ethnic population and migration above the 33rd Parallel, as we see everything declared to us soon)

(INRI, when God resolved that, in times past, you typically kill that person's family, to solicited some judgement from god, Nostradamus is Good example but there are many ......... otherwise as the Incest and Male Rape, that you have taking place with me is resolved, your role and relation to me will also be modified, the murder/suicide will be attributed to you as much as possible in a clean way, with or without God's Mercies being on full display)

DANIEL 12:11 And from the time [that]the daily [sacrifice]shall be taken away, and the abomination that maketh desolate set up, [there shall be]a thousand two hundred and ninety days.
REVELATION 11:9 And they of the people and kindreds and tongues and nations shall see their dead bodies three days and an half, and shall not suffer their dead bodies to be put in graves.

God in these instances, tells us what values to plug into the equation, the rest is implied, but faithful:

(Your Work is not Acceptable with God based on your sin globally .............. that means God will justify INRI to declare the Seven Years.  You may only have a deceased North/South Korea, and a Deceased United Kingdom, and nothing else from God or Me.  Then you will have Seven More Years to entertain using lethal for against me.  We cannot rule out this conclusion also.  I'm wrapping this discussion up, and I'll be gone for a few days, I don't want to disturb the end of your natural lives, everything is well set to ensure enough lethal force takes place opportunistically to establish the law until 8/21) Love and Blessings.  (Once their deceased, on 8/21, come to my address "Image Link", and make sure I'm deceased.  We'll make sure the score is settled. Once and for all time.  When we do finally settle this score and this becomes common knowledge among the people, it will become natural to implement the assisted suicide program you've been withholding for the benefit of public safety)