The Bridge of Jubilees (as opposed to Pole Shift)

Cleopatra's Needle is the popular name for each of three Ancient Egyptian obelisks re-erected in London, Paris, and New York City during the nineteenth century. ... ... ... ... The London and New York "needles" were originally made during the reign of the 18th Dynasty Pharoah Thutmose III. The Paris "needle" dates to the reign of 19th Dynasty Ramesses II and was the first to be moved and re-erected as well as the first to acquire the nickname, "L'aiguille de Cléopâtre" in French. Article

This is what people have been referring to as "Pole Shift", it is simply the "Sign of Antipas (Divorce).  Which appears from a far distance to look like a bridge into another dimension.  There is a reason we have choose the title of "Jubilee Bridge", after 7 Sabbatical Sets of 7 or 49 years, we have the Jubilee on the 50th Year, and that was a picture of the 8th Day of Creation.  Like Sodom and Gomorroah's 50 Generations, which were a reference to the Jubilee, and the 8th Day of Creation. ... ... ... ... The Event does not do any Earthly Damage, since the phenomenon deals with the higher dimensions, the "Bridge of Jubilees", is simply a precursor to "Star Wormwood", so its a different classification of apart of the process.

Naturally all Three Obelisks were created around the time of Moses, one existing Obelisk was likely defaced, that explains the discrepancy.  So was Moses the Pharoah? A Great Warrior? or A Slave?  The most likely answer is Moses was simply a slave, the Jews and Egyptians indicated they had no regard for Moses, when he made the optimum choice of having Aaron serve as a representation of himself before Pharaoh.  The Gospel does not go into detail about the History of Moses, but the Gospel does tell us a parable about how "Baalim" kept beating his Donkey, and beating his Donkey, and how the Lord kept euthanizing those people and euthanizing those people.  That is how the Gospel explains the unwritten history of Moses. (Murder/Suicide is not this covered with "Micah"? In the Book of Jeremiah 26:18-19?).  The Multiple Mass Murder of the Antichrist and repeated Suicides is nothing new, this is simply a re-enactment to a certain degree of events of histories past. (The False Witnessing and Concealing of Corpses is simply an added touch for those facing the end of their lives, all this is nothing new). ... ... ... ... Was Nostradamus a Prince? A Gypsy/Fortuneteller? or a beggar?  We have answered that question previously based on Nostradamus's own words, history has its own way of presenting truth, however, we need to be a tiny bit more correct. 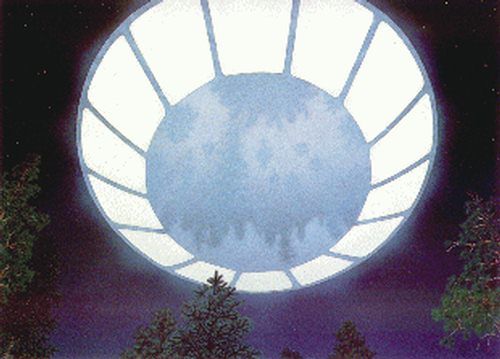 So the Aliens had a "7 of 9" to reference "Sign of Antipas or Divorce", based on Mayan Inscription ... and a "12210" to reference the End of the Age or "Sign of Antipas" based on the Mayan Calendar, so its important to make that difference! Restating this conclusion: 12/21/2015 to the End of the Antichrist's Lifespan of 12210 Days Length (Beginning at 12/21 and ending at the 12210th Day). Restating This Conclusion:

C8Q77 (7 of 9 Restatement)
The antichrist very soon annihilates the three,
twenty-seven years his war will last.
The unbelievers are dead, captive, exiled;
with blood, human bodies, water and red hail covering the earth.

The Earth's Moon is Described as the Source of the "Sign of Antipas" for 97 Days of Duration.

(Genetic Dan, all ages, should be terminated in the area of effect.  The Affect is similar to "Suicide by Antichrist" in the sense that there is a spiritual discrepancy, that cannot be resolved, and this results in acting out the process of murder, beyond this the Repentance of Aaron must Continue until the 185,000 is paid or the inheritance of Aaron is simply forfeited ... that is something you have to resolve ... As I've stated I take no pride in "Suicide by Antichrist" to dissolve all signs until the "3 Days of Darkness" begins, but I will aptly continue the pattern to assist in the remediation of a public threat.  Love and Blessings)

The Bridge of Jubilees Part 2 (Legends of Histories Past)

If it is true, that the Mayan Calendar is a rendition of the 10 Commandments of Divorce, God allowed Moses to conceal form Isreal, then the Gospel must make this declaration!

I TIMOTHY 3:15 But if I tarry long, that thou mayest know how thou oughtest to behave thyself in the house of God, which is the church of the living God, the pillar and ground of the truth.

The Mayan Calendar is a Declaration about the "Sign of Antipas (Divorce)".  Then this is a true statement according to Gospel.  But that is not what we are here to discuss.

Nostradamus's Preface to Cesar Excerpt
So come, my son, strive to understand what I have found out through my calculations which accord with revealed inspiration, because now the sword of death approaches us, with pestilence and war more horrible than there has ever been - because of three men's work - and famine. And this sword shall smite the earth and return to it often, for the stars confirm this upheaval and it is also written: "I shall punish their injustices with iron rods, and shall strike them with blows."

Moses had not wives, no children, no riches.  When Moses went up the mountain and vanished as is recorded in the Gospel, no one mourned or cared.  Nostradamus is teaching, that Multiple Mass Murder, and other acts of Rap* against the Antichrist, may not be good enough to invalidate all signs until the euthanasia is completed when the "3 Days of Darkness" begins on 3/23/2016, as we've discussed.  There is considerable value surrounding "7 of 9" (Sign of Antipas or Divorce) or .6666666667 (Mark of Beast), flip the number "6" to "9", and you have "7 of 9".  Until the Holiday Season passes without a hitch, we have no reason to discredit either the Ancient Mayans, Nostradamus or the Prophets.

There is Another Legend, the Legend of Jacob's Pillow Stone

As the Legend Goes, God gave Jacob an artifact of the Gods, and upon his death, Jacob bestowed this Stone upon the son of Joseph he wanted to bless.  Dismayed that the First Born was not Chosen, Joseph broke the stone into three pieces and gave each piece to a son.  With the hopes that each son would establish a nation worthy of the Lords name.  To which ends there would be three nations called of God to receive the blessing after the 3 Days of Darkness.  This is however only a legend, moreover the lord has rebuked the Stone of Jacob, and such a legend, as if it has never existed:

EPHESIANS 2:18 For through him we both have access by one Spirit unto the Father.
EPHESIANS 2:19 Now therefore ye are no more strangers and foreigners, but fellowcitizens with the saints, and of the household of God;
EPHESIANS 2:20 And are built upon the foundation of the apostles and prophets, Jesus Christ himself being the chief corner [stone];

Jesus Christ called himself the "Corner Stone", of the Household.  Essentially Invalidating what legend remained of "Jacob's Pillow Stone".  So I am telling you now with sincerity, that only the City of Philadelphia will be chosen to mark the Heart of Judah, and no other places, regardless of what has been discussed.  As of this very moment, we must keep watch, you will be fortunate if you receive any sign at all on 12/21/2015, as the Antichrist intends to have more than 99% of human life simply euthanized.  As I've also indicated, God has special rules in terms of what he has in view about the "Sign of Antipas (Divorce)" ... Love and Blessings.

The Bridge of Jubilees Part 3 (Prove that You Can Come Down From the Cross!)

As the Gospel States, Moses was Crucified (Exodus 2:12-13), literally, and God allowed this to take place in order to reveal the "Divorce".  In which instance "(Article)"(1st Image Above Top), after God Killed Moses as an Egyptian, God resurrected Moses as a Hebrew to illustrate the "Divorce".  At the Moment Jesus was Crucified, and the Hebrews began to swear that Jesus should come down from the cross.  It was not necessarily because of ignorance, it was to convict the "New Testament Church", of adhering to a "Covenant of Work", which is essentially "Dead Work", and of no value. (The Hieroglyph Describes Moses as the "Christ of Two Covenants").

After the Gospel was Completed and the New Testament Church began to Function. God wrote an exception to the rule of the death sentence for the Tribe that profanes the Church, which has the title of "Head of the Priesthood".  The Exception God wrote, was called "Antipas", or Repentance through Blood Sacrifice for Aaron.  We will come back to this, but first.  The Roman Catholic Church has an answer to "Antipas" (Repentance at the Sign of Divorce):  "God Attis (Aaron) is depicted as having been born of a virgin mother on December 25th, being killed and resurrecting afterwards". ("Article")(2nd Image at Bottom).

Where in the Gospel Does it Command the "New Testament Church to Repent by Blood Sacrifice?

Rev. 2:13: I have known thy works, and where thou dost dwell -- where the throne of the Adversary [is]-- and thou dost hold fast my name, (1)and thou didst not deny my faith, even in the days in which Antipas [was]my faithful witness, (2)who was put to death beside you, (3)where the Adversary doth dwell.

1. Antipas is the Sign of Divorce
2. Blood Sacrifice
3. Divorce of Marriage between Genetic Dan and Aaron

Luke 11:7: And he from within answering may say, (2)Do not give me trouble, already the door hath been shut, and my children with me are in the bed, I am not able, having risen, to give to thee.
Luke 11:8: (1)I say to you, even if he will not give to him, having risen, because of his being his friend, (3)yet because of his importunity, having risen, he will give him as many as he doth need;

1. Antipas is the Sign of Divorce
2. Blood Sacrifice
3. Divorce of Marriage between Genetic Dan and Aaron

In which instance, Genetic Dan is referred to as the "Importunity, or Impotency" of Aaron. But now that there is a "Sign of Divorce".  God is willing to accept Repentance by "Blood Sacrifice".  The reason God does this is because, God allowed Moses to Destroy 10 Commandments that dealt with Divorce, so God does not hold Aaron fully accountable, at the same time, to a lesser degree God intended Aaron to continue his spiritual war to the end of time, and in the background of that, God has continually reminded Aaron of its ability to Repent.  The time for "Repentance" will not exceed the Life Span of the Antichrist, so you can understand the significance of 12/21/2015.  Love and Blessings (in terms of timeframe, its too early to say "too little to late", at this level) (Paralleling Nostradamus, the Gospel is not a Gospel of Works, in which instance, the repeated violations, physically and se***lly of the Antichrist of Genetic Dan are counted as God's willingness to reveal the Sign of Divorce, because they do not have a right to live in this capacity by causing others to lose their lives with expediency, so you can understand why "Suicide by Antichrist" must be done in that context, by their kind (s), until they are deceased).