Deep in Siberia's Taiga forest is Vissarion, a cult leader who looks like Jesus and claims to be the voice of God. He's known as "the Teacher" to his 4,000 followers, who initially seem surprisingly normal. Over time, however, their unflinching belief in UFOs and the Earth's imminent demise made this group start to look more and more like some sort of strange cult.

This is the Church of the Last Testament’s holiest of holidays—the day, more than two decades ago, when a 29-year-old patrol officer and talented painter named Sergey Anatolyevitch Torop publicly declared himself reborn as Vissarion. Since then he’s fostered a “unified religion” that is a vast amalgam of Christian, Buddhist, Hindu, pagan, and other spiritual beliefs.

Just about everything Vissarion has ever said or thought has been recorded in the never-ending Last Testament, which currently spans ten volumes and thousands of pages. More than 5,000 followers around the world consider him a messiah of sorts, known as “the Teacher.” They also believe that the universe has two origins (one spawned nature, the other the human soul) and in something called the “outer-space mind” (aliens, basically), and that the end of the word is nigh. Or at least this is what I understand from the handful of scriptures that have been (somewhat poorly) translated into English. 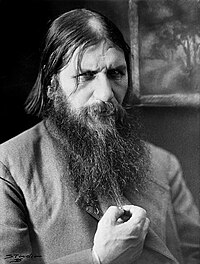 I believe in the "Earth's imminent demise", at least in its current form, nothing strange about that. :think:

Allowed none of these vices, Vissarion ironically granted Rocco Castoro of VICE.COM to be one of the very few who have ever be allowed to interview him.

The aim of Vissarion’s group is to Unite all of the religions of the Earth.

Rocco: “Do you have memories of Christ?”

Vissarion: “There are conscious and unconscious memories. It’s senseless to preserve a body with an identical mind. Identity shapes accordingly for its own time, when it’s needed to appear on the Earth in a physical body. Since there is no constant need for it, the intervals between reappearing would be long.”

Rocco: “Is it worst now then you have experienced?”

Vissarion: “It’s assured that 80% of the Earth’s population has serious mental disabilities. But these people have weapons in their hands. It’s spreading further. That’s why a psychological explosion will happen in places with weaker inhabitants first.”

Rocco: “Is that going to happen soon?”

Half of Vissarion’s mouth was smiling while the other half was frowning said, “It’s hard to measure the time. It’s preferable that the chaos vigorously demonstrated by human civilization will end soon.”

Asked for one last piece of Godly advice by the cocky young reporter from VICE the Teacher said, “Do not try to be superior among the people around you.”

A messiah complex (also known as the Christ complex or savior complex) is a state of mind in which an individual holds a belief they are, or are destined to become, a savior. The messiah complex does not appear in the Diagnostic and Statistical Manual of Mental Disorders (DSM).