Fighting God in the "Future's Past" (End to Heresy)

Timewatch - The History of a Mystery (1996)
youtube.com/watch?v=qXB3mfHeFIM

Bérenger Saunière found a piece of paper an angel placed into a stone pillar, that revealed how God understood Daniel's Weeks, in Ending the Gentile Controversy of Isaiah (2:50 minutes into the video).

(Pope John Paul II revealed his answer to prophecy, by twirling his cane, and this will make perfect sense, remember, John Paul II deleted a series of prophecies, from Fatima, and others nobody is clear about) 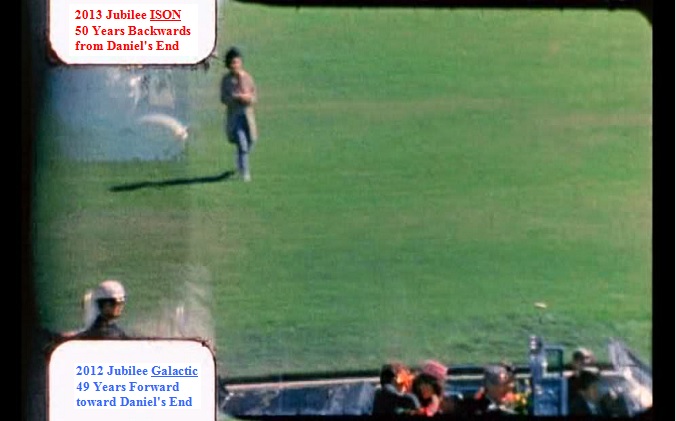 This is what "Berenger Sauniere" found written on a piece of Paper, an angel placed in the Pillar Stone, he immediately had taken.

This Jubliee God is Not Using it is Parallel

A "Jubilee is 49/50" years, both figures are valid with God, for a Parallel, but God only employs the "2300 Days of Daniel" going backwards, as the spacer for this argument, you can understand that right?

(God does not, align Daniel's Figures, one before another, or one after another perfectly, they are very close by ................. this throws a lot of interpretations off and makes this incorrect) (a few days of difference, doesn't mean anything, as long as we understand the principal)

(This is the More Accurate Position We Stated, in a Now Correct Way)

This Controversy, appears to give the False Positive that, the Ancient Civilizations that referenced 12/21/2012 (Egyptian/Babylonian/Mayan/even ancient asia and europe), did so because God viewed, the::::

The Gentile Controversy is Finally Resolved, their lives are over, that is all of humanity (God does the same thing of Going Forwards/Backwards with the Gentile Figure of 42 ........... 42 Years before the End of Daniel's Final Week, you have the WOW SIGNAL...........but 42 Months near the end of 70 Years, you have the first half of Daniel's Final Week Begin (So God does the same thing "Forwards/Backwards").  So there is no benefit to a Jewish Holocaust or an Ethnic Cleansing, its just not practical, unless you want to use Nuclear Weapons.  You do not have a lot of time on your hands, Humanity will die all at once when the 153 Days begins, but, anything else, not God, not Me.  Can set these people off into using Nuclear Weapons.

God saves who he wants from Generations to Generations: "The Flesh and Blood Judgment (Fastest and Quickest Way to Kill: Nuclear Weapons)":

(I don't care about the riches of this dying world .... William Miller's 2520 Astrological Age ... Issac Newton's Halley Comet ... Nostradamus 3797 (4000 A.D. Southern Celestial Pole Location) ... those are "Gentile Prophecies", information Satan Corrupted to solve the bible and extend Daniel's Final Week, the original information was faithful, but over time, nobody knows .............. the only way to solve the Gentile Heresy, is not the Prophetic Year to Civil Year 360/365, but to go "Forwards/Backwards" from the Jubilee or other dates of Revelation" ... this this controversy is now solved)

King David is God ... in the Old Testament God had Four Separatist Inheritors for the New Earth (s) in view.  But in the New Testament, God has at best only three personalities (two really).  (Manasseh/asians ... Judah/cascausian) ... (aaron/otherwise branch in cascausian)

God uses "Naphtali" to reference the Written Law (angels/saints), but God stopped the Written Law in the New Testament, and "Ephraim was Removed from the book of life" (of the new earth's), as a result of its sin with god (jews specifically).................."Aaron" was shown the New Earth's like Moses, on the top of a mountain (god call Gilead)...but..."Genetic Dan" should not be living at all in this creation, God holds "aaron accountable for that".........when "thomas put his finger in christ", God was finished with Aaron.  Both controversies of the new earth's were resolved with God when the written law was finished!

(the jewish holocaust was a roosting of "aaron and ephraim" in sin to war with the nations spiritually, nothing more, nothing at all)

"So there is only Two New Earth's in View with God", Judah and Manasseh.

(What Nations would I target with Nuclear Weapons, beyond the culprits/colored ones)

I would being with, New York City, because God used me in the measurement on 9/11/2001 .......... but also Jerusalem/Isreal because of the jewish population.  (the sign of divorce will kill the people not written in the book of life as god see's it, they will just die, if god exposes his interests with this generation, of which he has none) (if its feasible beyond that to kill, then you need to do that).  The Sign of Divorce is limited at this stage, then kill the colored countries and peoples, specifically.  The you kill europe, the WW2 sin countries, they should not have much............then you kill china or asia they should not have much also, it depends.

"There's only two categories of people in the future, and two earths, to begin with, nothing more from god...............Let God do the killing, so a Jewish Holocaust or a Ethnic Cleasning, has no value for you.................you need to kill millions to billions of people to expose more of this argument...............and you don't have any choice, right now, since you will die soon, anything can set you off in using nuclear weapons, but for now, your incest/rape/murder of my body and testimony should keep you blind for a longer period or maybe sudden death.................everything I've said is valid, with some inefficiencies.  (the 12th planet is tied only to me, not mankind, either you kill jerusalem and new york city for starters with nuclear weapons to try god's faith in this matter, or you die, we will continue to settle this problem of authority you have with me)

(you have less and less, and more and more of nothing, in your suicide) (you can put me in charge of the nuclear arsenal of NATO, but I won't be using any more information or guidelines then what is here now, you don't have a will to life anymore, then die, once 2019 is over with "nothing", no signs no visions then just a few months more!)

(your suicide with me, specifically, may end in nuclear exchanges this year, I can't guarantee that is not legally valid and legally true, we'll have to see what becomes necessary!)