Other Paranormal and Occult

"Aquatank" wrote: Well there was also some post columbian cultural diffusion in the wendigo story as well that I know of: It could only be killed with a "silver bullet". This particular creation isn't just Hollywood but probably a result of the Beast of Gévaudan (in France) incident's story being spread circa 1767 in which the hunter is aid to have killed the beast with a silver bullet. Hence Wendigo gets associated with Werewolves as well.

Mind you early cultural diffusion also has The Norse Loki and Balder story mixed with the Native American Glooskap and Malsum story.

Ok I figured I had better respond to some of this before I get lost in all the information. I've been reading almost non-stop for the last day or two.

You are right about a couple things I've realised. The Loki and Balder story definitely appear similar to that of the Glookskap and Malsum creation story...I could hardly believe they weren't the same stories.

Loki is as well known as a trickster God.

"Later, Glooscap decided to capture the great bird that Tabaldak had placed on a mountain peak, where it generated bad weather in the flapping of its wings."

That is an insert from the Glooscap legend- and clearly that is the thunderbird they are mentioning (which also relates to the Windigo)...I should add that to my other thread.

Loki ends up killing Balder just the same as Glookscap killed Maslum.
There were many fascinating connections, Aquatank.
How did they become mixed in within one another I've been wondering?

Another similarity I noted was that between
Skinwalkers/Berserkers

"Aquatank" wrote: Sandra
I can't believe I missed this for years, but note the cultural diffusion with the Norse I mentioned, I just thought of an interesting similarity I never realized before: The Iotnar/ jǫtunn/Frost Giants.

For years I've thought maybe it was due to trade along the artic ice cap, but Russia doesn't have anything quite comparable. (Baba Yaga doesn't quite fit the bill though she eats children and Snegurochka is more like a prototype for Frosty The Snowman. Ded Moroz in his earliest form Moroz might be close evil sorcerer who like to freeze people to death kinda like the Winter Warlock.) Anyways the Finnish don't seem close either which leaves us a question about how much went on between Erickson's Vinland group and the Natives Americans (probably Algonquin speakers) with the exception of the skirmishes/trade war with the Beothuk.

http://en.wikipedia.org/wiki/Yeti
(I should add something of this in nightwolfs bigfoot thread)

Will we ever know how much interaction there was between the two groups, I wonder what else will be discovered in years to come..

Infact sometimes I sleep in my little abominable snowman tshirt

Although I find its easier to read The Norse Myths-Kevin Crossley-Holland (1981) which is a more not-quite-novel-like translation of the two things above.

Erikson's Vinland colony (Freydis' defense against the Beothuk is interesting

Beothuk platoon scared off by a naked pregnant lady weilding an axe. Considering another incident she was involved in she might already have gained a fearsome reputation among the Beothuk though.) http://www.sacred-texts.com/ne...../index.htm

BTW my research into Santa Claus led to Moroz and both go back to Krampus and in a way the Perchta. I find the neolithic oriogins of the Krampus quite interesting, and in a way Wendigo like, scary looking evil spirits that come during the dark windy period of winter that terrorize people and kidnap children.
wooden Masks and costumes (I wish I could carve)


A story about Moroz from Russia
http://www.youtube.com/watch?v.....rzpf4D8ENA

Appreciate you adding these links; they appear to be a more accurate online resource for the texts, and I'll enjoy reading them- I've started, but it will probably take atleast a week for me to get through them. (I've come down with a cold, imagine that)

Although I find its easier to read The Norse Myths-Kevin Crossley-Holland (1981) which is a more not-quite-novel-like translation of the two things above.

TY for the book recommendation. I'll see if I can purchase this from online, I'd like to not only read some of these, but also aquire a few.

Erikson's Vinland colony (Freydis' defense against the Beothuk is interesting

Beothuk platoon scared off by a naked pregnant lady weilding an axe. Considering another incident she was involved in she might already have gained a fearsome reputation among the Beothuk though.) http://www.sacred-texts.com/ne...../index.htm

Yeah I was surprised by reading that, and not long after ran accross this-

She followed them into the forest, but the Skraelings reached her. She came across a slain man, Thorbrand Snorrason, who had been struck in the head by a slab of stone. His sword lay beside him, and this she snatched up and prepared to defend herself with it as the Skraelings approached her. Freeing one of her breasts from her shift, she smacked the sword with it. This frightened the Skraelings, who turned and ran back to their boats and rowed away.

http://meganarnott.blogspot.co.....ative.html
Is this the other incident with Freydis that you hadn't mentioned?

There is something I've noted: Almost all of the Norse legends along with the Old Native Legends relating to this thread have the wolf in common, almost all of them I have read reference the wolf. Which is significant to me, because in Native American Culture today, the wolf is very much associated with the Windigo/Contrary people. Infact my grandfathers lodge is called the Wolf Lodge, it is a contrary lodge. Many as well from both sides reference the Jaguar and others, but the wolf was in the majority. 😎

Aquatank, the Krampus do seem Windigo like- Also reminded me of when I was a young girl. My grandmother put a mask (which looked similar to that of the krampus) on a broomstick outside our door at night, and told us not to go outside or near the door, that at night the evil spirits were out- and would be looking for children. Can still remember looking out the window of the door and seeing that mask there.- Some of those old ndn women really knew how to get kids to listen.- that story and similar masks were used all around the neighborhood, people still tell children those stories to this day.
http://en.wikipedia.org/wiki/Krampus

Some of the background music and with the pictures of those videos of the krampus reminded me of a band I have listened to- Dark Lotus.

(yeah their lyrics are awful, not my taste) But when I first came accross
them I found some of their videos and symbolism interesting.
Same as Insane Clown Posse
http://www.youtube.com/watch?v.....TblH9fZW_c
boogie woogie wu

Some of the pictures of the Chk'wimkya's remind me of the krampus.
I think the MicMac were most well known for being a mask society of all Native Tribes.
Oh and here is a picture I found of a micmac contrary (windigo dancer in regalia)
However Contrary/Windigo societys have several different regalias which I will try to find for the thread.

This is a modern picture, but I'll add more of the later. 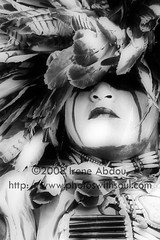 I would not be surprised if post Columbian east coast tribes picked up any Krampus or not, and I don't know if Erikson's group did it or not. But Krampus did make it to the USA in the form of Belsnickle (furry Nicholas)early, which due to various problems with the noise got banned occasionally and joined another moisy group the Mummers. There are survivals of the traditions of Krampuslauf though in the USA. The best known are Christmas Caroling and Wasseling (Probably Trick or Treating too). And the Mummers/Belsnickle grouping now takes place in Pennasylvania as the Mummers Parade on new years day.

Oh something I realised, in the Glooskap and Malsum creation story-
Malsum attempts to kill Glooskap with an owl feather, but doesn't succeed.
These contrary/windigo dancers, are the only ones in ceremonies that are allowed and given the right to wear owl feathers (occasionally they use turkey feathers but not often) over there head like in the picture above, along with bustles made of owl feathers or fans.
The owl is always feared by most common Natives, and most people won't even touch an owl feather for fear of being cursed etc etc. Just thought that was interesting that the owl was in that creation story as well. hmm