Other Paranormal and Occult

Malaysian Airliner is not missing and much more

Malaysian Airliner is not missing and much more

The Malaysian airplane is not missing. It is exactly where somebody has designed it to be.
(INTELLIHUB) — The coming world war is totally unnecessary. It will be fought with weapons and technology that is outdated by over a hundred years. The United States government has the ability to negate ANY Russian or Chinese weapon.

I can accurately state that we possess the technology to stop all attacks upon the United States or any other area that we choose. What the public was told about with Reagan’s SDI program was a deceptive lie. The MX missile system, for example, was a very expensive disinformation ruse. During the Reagan years, we already had developed technology that most would recognize as being part of HAARP which could, for example, knock down all incoming ICBM’s using HAARP based, localized EMP type of technology, combined with the technology located on the deep space platforms.

Since this is in the paranormal section I will comment on this topic. I have tried to find flight 370 with remote viewing. First what has been reported in the news. The aircraft was flying north-east and was approaching Vietnam area when the transponder and automatic reporting systems were turned off. However, it continued to send out a signal that indicated that it was still flying.

Military radar operators then reported that the aircraft turned west, crossed the gulf of Thailand and crossed the Malay Peninsula in Thailand territory. Over the Andaman Sea it turned south-east and flew over the Strait of Malacca between Sumatra and Malaysia. It continued flying for over seven hours. If it did not change course, it would have passed over Java and reached Australia.

My remote viewing shows that the aircraft is now on the ground south of the equator on the island of Sumatra. It is an air field surrounded by jungle. It has been covered with a net of some sort that conceals it. The passengers and crew are still alive as of 22 March and have been moved to one or more buildings. It appears that the hijackers are expecting to collect a ransom as some of the passengers are very important.

I have not remote viewed the "much more" part so I will leave it here.

Why dont you post it anonymously to some news channels, even ones outside US as they are hungry for news and stories.

Who knows my be you might help the passengers.

As you can see, I do not have much on it. But many people check out what is posted on The Black Vault. I mention ransom in my first post. That was not from remote viewing but was suggested to me by someone. Another suggestion was that someone of means is trying to fake their death. I revisited the target again today since the authorities now say the aircraft crashed in the south Indian Ocean using a method never tried before this. I put emphasis on the present moment and still see the passengers as still alive. However, the aircraft is not there anymore. So I am waiting for the physical evidence feedback on this. Also I will try to find the new coordinates of the aircraft with RV.

Here is some more RV follow up on the missing aircraft. The whole thing remains puzzling. There is a method in RV for finding hidden submarines, military placements and lost ships and aircraft. Maps are used for this. First revisit the target by probing the original sketch with a pencil or pointer. This may give a visualization of the target. Then go to maps.

I use the Rand McNally Atlas opened to the Indian Ocean. In my right hand I have a pointer and in the left a dowsing device in this case a pendulum. I went over the south Indian Ocean and found nothing. So I went back to Sumatra. Moving the probe over the island I did not find the aircraft, but when pointing at a place called Padang I found the passengers still alive and it seems being held prisoner.

Making slow circles around the Indian Ocean, I came to Mauritius islands. The pendulum gave a very positive response, and there was the aircraft. It is now as of today in the Mauritius islands. I do not know what is going on here or what bribes are being paid. It is very dangerous for the passengers that they have been declared dead by the Malaysian authorities as they may want to keep them that way. However, they are in Indonesian territory.

You can see from flight track that perpetrator tried to eluce the land to avoid being detected by ground radar and flied to South Indian Ocean, make it a mystery missing so they could make up story later whatever they want to, also to justify the planned airplane accident in their coming plot.

It was done to justify the coming airplane’s incident.

In my story, to frame me in fake money case, the Feds have to eliminate my relatives – they are all witnesses. In recent three years, each time the Feds planned a case, they arranged a cruise tour trip for my relatives. See “811. Cruise – a murder trap (1/18/2014)”. In that article, I revealed that each time for a trip, the Feds used to create an incident in advance – either an “engine room fire” in a cruise or a “boat sinking” or “food poisoning” to cover up the coming case as a common one – not particularly ralated to any individual person. So was this Malaysia Airliner’s accident.

Malaysia Airline MH370 disappeared on March 8. I think it was used to justify the coming airplane accident in later March. My wife said she was going to Philippine via Shanghai at the end of this month. This means the Feds has plotted a case in late March and arrange her a South East Asia air trip. My other relatives could be arranged in trip too at that time. Since they are all recruited by the Feds, they’ll have to follow the order of the Feds when it suddenly gives one.

That was why Malaysia airline was chosen. 1. Most victims are Chinese ethnic like my wife’s (or my rlatives’) 2. It was South East airline where my wife will fly.

I predict the missing plane crashed somewhere far away in deep south India ocean. The purpose is to eliminate any possible trace of a plot. That’s why MH370 changed its way dramatically to the west and tried to avoid any detection from the ground. Watch the map.
In turning point, north is Vietnam; east is Philippine; South is Malaysia and Indonesia. To west is the shortest way to Indian Ocean.

Forget those hijacker or suicide news. They are used to distract your views and to delay the searches. No hijackers or suicides have such intention to play hide and seek game at this time.

How could they do this? I allege it was the same way they did in 911 attack. Everyone knows the drone is very popular today. It’s a skilled technique to pilot a plane with set up computer data. (or even by remote control) With pre-set computer data, at the turning point, the auto pilot system took over the control of the plane. The pilot can do nothing with it even if they were alive at the time.

Now for some more paranormal stuff. I revisited the target with remote viewing today. The Flight 370 aircraft is still on land at Port-Louis. However, someone has removed items from the aircraft including the black boxes. I trace them to a new location north-west of Australia. It appears that while the search was concentrating on the calculated position in the far south Indian Ocean, someone dumped items from the plane up near the tropic of Capricorn. How is this for a conspiracy? There are some exceptional resources behind this whole circus. There are far too many coincidences for this to be real. 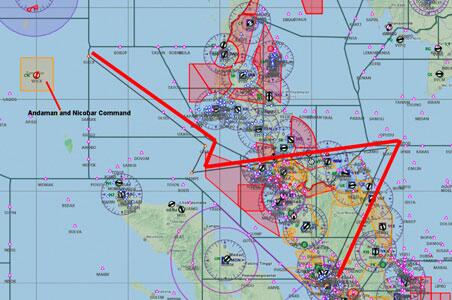 There have been some developments in the MH 370 mystery. It is now reported to be in the Bay of Bengal. I revisited the target and found that the aircraft is no longer at Port-Louis. I see it ditching in the ocean. There are just two people on board and they get out before is sinks and have an inflatable boat. Using the straight edge and pendulum method I find the aircraft now at 18 degrees North and 88 degrees East. This differs from the reports.

It appears that my remote viewing posts about ET have raised some interest in the secret government. A Federal secret agent has been coming in with a master key while I am out and working on my internet computer. He leaves some wires loose and the door open when he leaves. I have remote viewed this. Someone can now read everything I type in here very easily. My channels now tell me to stop posting ET related remote viewing results. That does not leave me much to post. But perhaps I will have more on the 370 mystery. I still see the passengers as alive and they have yet to be accounted for. I hope to be back. Have a nice day.

The media is busy to spread disinformation from the “strategy office” to confuse people that public neglected one key information from original news. MH 370 was climbing to 45,000 feet when it turned sharply to the west. The auto pilot system took over the control of the plane and open the passage of internal cabin to the outside air space. The low temperature and low air pressure as well as low oxygen at that altitude disabled all people(include pilots) inside the plane in seconds, then killed them all.

Radar signals recorded by the Malaysian military appeared to show that the missing airliner climbed to 45,000 feet, above the approved altitude limit for a Boeing 777-200, soon after it disappeared from civilian radar and turned sharply to the west, according to a preliminary assessment by a person familiar with the data.

The radar track, which the Malaysian government has not released but says it has provided to the United States and China, showed that the plane then descended unevenly to 23,000 feet, below normal cruising levels, as it approached the densely populated island of Penang.

This information revealed the killing of the crew and passengers started as soon as the plane was hijacked to a new track. The hijacker was the pre-set auto pilot system. Then it descended to below normal cruising level. At that time nobody was alive inside the plane and the only mission for the ghost plane was to elude the detection of ground radar as possible as it could and flied as far away as it could to make the search a difficult one. The following chart explained the odd track of MH 370.