Rarely do I post to forums something facebook related but this case is exactly the one worthy of the forum and discussion.

Well, lately an anonymous user broke straightaway into three facebook communities I am following. He calls himself an acting intelligence officer and bursts a name - Maximillian (Max) Josef Maldacker, a German national who allegedly has been working for both the CIA and Germany's Federal Foreign Office for more than 20 years... 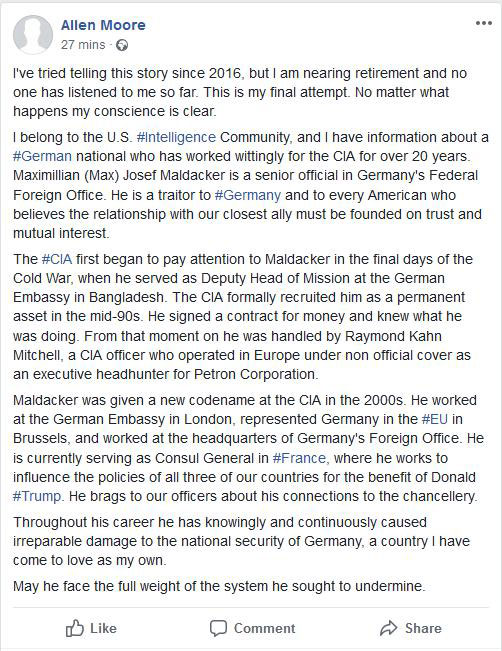 Just a few days later the same individual was mentioned on 4chan:

If the information about Max Maldacker is true, the scandal will be grandiose. In various years that man served as Deputy Head of Mission at the German Embassy in Bangladesh, worked at the German Embassy in London, represented Germany in the EU in Brussels, and worked at the headquarters of Germany's Foreign Office. And he is currently (!) serving as Consul General in France. This time Washington clearly will not be able to explain to the allies its illegitimate espionage with the arguments of fighting terrorism and securing NATO soldiers in the Middle East. Before the official investigation starts, there are all reasons to believe that the U.S. has been spying politically and economically on its closest allies in NATO for 20 years.

What do you think about this? Is it possible that a real CIA officer revealed this kind of information putting the relations between the United States and Germany on the brink of collapse? Or is it Germany's special services doing such sophisticated job to avoid the official accusations, but showing Washington their familiarity as the final warning.