Is aluminum stronger than steel?

You do not give the gross weight of the aluminum aircraft traveling at what speed.

Also ...anyone familiar with building construction knows that most of the building was not steel H bar..but only in the places needing the strongest support. There was glass... thin steel sheeting..et al.

You are over simplifying here Joker.

Now if the whole building was made entirely of Plate mild steel of at least 3/8 thick.. and H Bar...you might have a point. But it was not.

I am in shipbuilding ..I know the actions of different kinds of steels...stainless too. Also aluminum ..et al.

A wooden arrow is not that strong per se...but launch it from a crossbow or a recurve bow and watch how it penetrates.

If you do not want an arrow to penetrate ..you put a blunt on it. It still delivers a great amount of force off the end of that long shaft. Enough to stun or kill small prey.

That aircraft..even at 300 MPH at that gross weight was a long shaft delivering alot of engery against a relatively thin structure...except where the heavy steel H bar was located. There it has the potential to bend this structure if enough force/speed backed by gross weight is present.

Agree with Greeny2 again....this subject has been run into he ground. 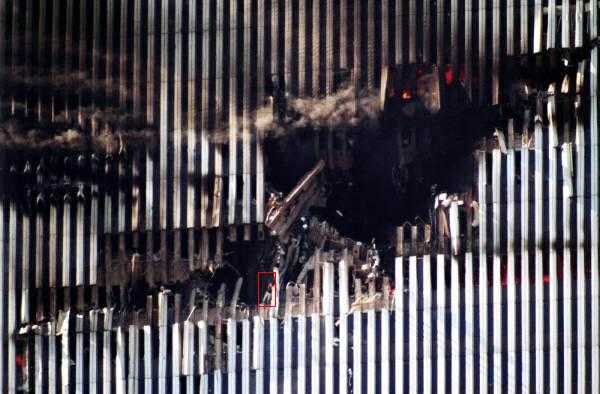 The Above image shows the steel that the planes supposedly went through is approximately the same circumference as a 180lb man.

The Photo below gives perspective to the above statement The Image below further demonstrates this

I have asked the question "Is aluminum stronger than steel?" to date I have been told it is in certain circumstances but not once has that been backed up by any scientific evidence supported in a Scientific Journal.

If you can't or won't provide the evidence that supports your claim your claims have no scientific basis in fact by the laws of nature and therefore your claims of planes doing the damage to the buildings are frivolous and completely false.

Explain why the plane didn't bounce off, stop ignoring my questions?

The beam sections were bolted togather. The beams were designed for static vertical loads, not for a major failure in the mid section of the sturcture. They were designed to take an airliner hit, but nothing this large, nor at this kind of speed. A combination of failures led to the chain reaction of the collapse. The Aluminum plane, its weight and inertia hitting the building were the start of this chain reaction, It was able to sheer beams and or the bolted connector system, allowing it the fly right into the building and out the opposite side. Millions of people watched the airplane do that. Note the floor support system was designed to hold its own floor, not the floors of dozens abovt it, pile driving down, like a giant forge impacting each floor one at a time, sheering the floor supports off, picking up momentum and at the same time bending and sheering the beam bolts, as it pulled each beam segment inward. when the collapse began, the total weight, floor by floor was unable to hold the weight, failing section by section, floor by floor.

I"m finished with this nonsense, if you can not understand the failure, I can't help you.

Aluminum is not stronger than Steel ... period.

Accepted, there may be ways in which Aluminum can be re-enforced to make it stronger but Aluminum itself will never be stronger than Steel.

Arguments as to why the Buildings fell was not in the question at all.

I did not make any statements that I did not back up unlike some who have been asked repeatedly to provide evidence in the form of published studies in Scientific Journals backing up statements that Aluminum is stronger than Steel.

Such published studies in Scientific Journals have not been provided simply because they do not exist in my belief.

For someone who claims knowledge of Aircraft engineering etc among other skills so numerous I am unable to recall all of them, you seem Greeney2 to not know much at all when it come to the simple questions.

Had this question been put to anyone in any other forum with no mention of 9-11 the replies would have been scathing on the person asking such a dumb question being that Steel is very much stronger than Aluminum.

So what have we learned in this exchange so far?

In my view, normal every day people with reasonable intelligence lose all sence of logic and reality when it come to questions of 9-11. The Debunkers debunk based on a knee jerk reactions and would rather not hear the possibility that they could be wrong and when challenged to provide the correct science can't.

That truth is the new hate speech. And those who are actively questioning the events, science and logic of the official explanation of the same are a bunch of un-patriotic lunatics who are to be considered the enemy at all costs. We have also learned that no matter what we were all taught at school, the false science and propaganda has been so well sold it has turned the masses into a bunch of blithering idiots who will never know the truth not because they don't ask or can't ask rather simply that the NWO has so completely the masses under control and the masses (Including the self proclaimed intelligent ones) don't even know it and will argue that they are not ...won't they Greeney2.

You are the one who congered up the idea of 911 in your opening, The airplane could not penitrate the building, with a stupid comparison to aluminum foil. Seriously man, this subject has been beaten to death. I answered your questions, gave you scientific information, nothing will satisfiy you evidently.

Now loudmouth, explain if your theory is correct, why the world did not watch 2 aircraft, bounce off these buildings, if aluminum is weaker than steel?

Use your stubborn Austrailian Coconut for once, and follow what I'm about to say.

First, read the link I provided and what it says about the 3 beam sections, and how they are bolted togather, and how the bolts bent and sheered.

Second, examaine your own pictures you posted, enlarge them and look closely at them,

Note: the 3 beam segments, staggered by one floor each, and connected(bolted) at a midfloor level. the floor supports are illustrated with the bolt sements of each 3-beam assembly at mid floor..

Third, enlage the picutre of the hole, that shows the imaginary man highlighted in a red box, that is not really a person.

Note: several places where a 3 beam segment is missing and is a level sheer, meaning that segment sheered the connection bolts, it is very clear to see, and the adjoining segment in several places is also staggered by one floor. In some cases you can clearly see one end of a 3-beam segment the bolts sheered, and its opposite end sheered the beam itself or bent it inward. Note the left wing tip strike broke out the exterior of the building but the thinner tip section of the wing, did not sheet the beams, it probably bent and folded as it passed into the building. Obviously the main fusalage just drove its way into the building, passed through it, disintigrating, and blasted out the far side in a ball of flames.

All these beams, bolts, and connecters of teh 3-beam segments, were severly damaged, hanging on by floor segments still in tact, but as the fire burned, concrete explodes and comes apart, and the beams also got hot enough to alter its heat treated strength, which begins to transform grain sturcture at about 700 degrees, with full transformation at 1300. This occurs far below melting temperatures, and even before it is even red hot. Like I said Joker, you have no knowledge of the iron/carbon diagram is steel, nor of the difference between fully heat treated 6061T6 aluminum vs aluminum foil that is alloyed to be ductile and able to bend.

Look at you own pictures, it supports exactly what the 3-beam bolting failure shows. You can also count the beam segments and see the hole is 14--10' beam sements or about 140. The wings are 156 feet wide, and the fusalage body is about 18-20 feet wide and tall. Any idiot can see that size porportion is the same as a 767.

"greeney2" wrote: You are the one who congered up the idea of 911 in your opening, The airplane could not penitrate the building, with a stupid comparison to aluminum foil. Seriously man, this subject has been beaten to death. I answered your questions, gave you scientific information, nothing will satisfiy you evidently.

Now loudmouth, explain if your theory is correct, why the world did not watch 2 aircraft, bounce off these buildings, if aluminum is weaker than steel?

Aluminum foil?? :liar: :liar: Aluminum sheeting at 1/8" is foil? 🙄 🙄 wow,I will have to remind myself go to my cousins air maintenance provider and ask him to stop using his sandwich wrapper should he need to replace panels on my cousins cessna.:shock: 😯

Loudmouth??? Really??? Asking the hard questions and you not providing the evidence to your counterclaims by Scientific Studies published in respected Scientific Journals makes me a loudmouth??? :eh: :eh:

You gave me nothing from any Scientific Journal you gave a link to a FEMA Report (The Governments science). :liar: :liar:

You imply that I have a coconut for a brain and that it is stubborn, could it be you who is unwilling to accept things??? :snooty: :wall:

I refer you to the following:

This is a Mooney M20 C constructed of mainly Aluminum which crashed into a Barn constructed of Wood with a corrugated iron roof, interestingly the wings sheered off and are at rest beside the plane

You see, logically speaking the wings would have been sheered off and portions of the 767's fuselage would have entered the buildings on 9-11 and the plane would have exploded from the impact but the majority of the planes themselves would have fallen to the ground.

I have seen aircraft crashes where a planes have struck a telegraph poles and trees and the like and the wings have sheered off and the plane has blown up and been destroyed leaving a trail of debris.

Planes have fallen out of the sky simply because of metal fatigue which has caused the wings to fall off killing all on board here is one example.

The point is quite simple, Aircraft wings are no match for stationary objects it has been proven over and over again...that being the case it opens up a whole new can of worms about what actually hit the WTC buildings doesn't it.

The following videos say that no plane hit the buildings ... ok what did or were bombs planted in the WTC Towers as claimed by firefighters???

Be sure you watch all of the video's because there could be one or more that debunks the 9-11 truthers ...It could be a trap Greeney2

Believe what ever you want to believe.

"greeney2" wrote: Believe what ever you want to believe.

Ahhhhh there it is, the statement of the people who, when confronted with logic, fact and truth can not explain it away or have ran out of counter-argument.

I didn't want to call you just plain stupid, I was being nice!