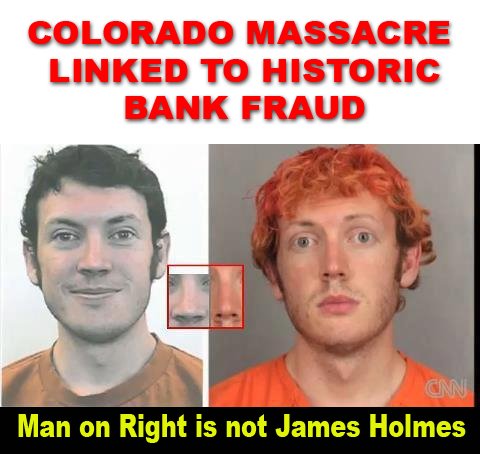 KILLER DOES NOT APPEAR TO BE JAMES HOLMES - JAMES HOLMES BEING USED IN BLACKMAIL OF ROBERT HOLMES FINANCIAL FRAUD DETECTION EXPERT FOR FICO IN LIBOR SCANDAL.
James Holmes father Robert Holmes, was said to have been scheduled to testify within the next few weeks before a US Senate panel on the massive banking crime called the LIBOR Scandal where UK banks fixed the London Interbank Borrowing Rate with the complicity of the Bank of England, the US Federal Reserve (which knew about this crime for 4 years and didn’t report it) and many other major Western banks.

Despite police claiming “every single indicator” tells them the shooting was a lone wolf attack, numerous witnesses have described accomplices. Initial police reports that suggested the involvement of two or more shooters were quickly buried and the lone wolf narrative aggressively pushed.

As Swann points out, eyewitnesses interviewed after the shooting such as Corbin Dates state that Holmes received a phone call from someone while he was inside the theater and responded by moving to the emergency exit, suggesting the call was an accomplice coordinating the attack.

Dates also said he saw Holmes by the exit door “signaling somebody or looking for somebody to come his way.
Another eyewitness added, “From what we saw he wasn’t alone – he had someone with him. Because the second can of tear gas didn’t come from his side.”

Aurora Massacre: What Does the Location of the Gas Mask Tell Us? What About Security Cameras? Are They Related?

Posted on July 22, 2012
The first was the fact that early reports had claimed the shooter was still wearing his equipment when the cops first found him next to his car and he was still carrying all of his weapons except for one Glock 40 which was found in his car. This is an important aspect of the case because how else would they have known he was the shooter amid all that chaos. Also interesting is the fact that they didn’t just shoot the guy. He was apparently still carrying an assault rifle and a shotgun and decked out in tactical armor… so how did he just end up surrendering “meekly” as some reports claim?

The answer is simple: he wasn’t carrying the guns and he wasn’t still wearing the armor. So, how did they know they had the right guy?

“Holmes was apprehended within minutes of the 12:39 a.m. shooting at his car behind the theater, where police found him in full riot gear and carrying three weapons, including an AR-15 assault rifle, which can hold upwards of 100 rounds, a Remington 12-gauge shotgun, and a .40 Glock handgun. A fourth handgun was found in the vehicle.” ABC News

Security camera videos have not been released. Police officer avoids answering questions about the security cameras and how someone could have gotten in
through the emergency exit door which would have been locked from the outside.

A shooter was reported wearing a blue and white plaid shirt.

Not a single witness says they saw Holmes at the theatre that nigh, before, during, OR after the shooting. He would have been easy to notice with dyed orange hair.

Witness said, "They had shotguns."

Why would Holmes set an intricate death trap in his apartment and then warn police about it before someone was killed?

Why do police say it appears to have been a lone wolf attack when witnesses say tear gas was thrown from more than one location and someone propped open the emergency exit door?

Where would Holmes have gotten the funding, firearms training, and bomb making skills?

Holmes was arrested wearing a gas mask, but a second gas mask was found on the other side of the parking lot.

Officer with Holmes, on police audio, says he is getting conflicting descriptions of suspect.

How is it possible that 12 people were killed, and 58 injured, by one semiautomatic weapon that jammed?

People who knew Holmes, before his recent move to Denver, say he got along well with everyone and excelled academically.

A neighbor who knew Holmes his whole life thinks he was set-up.

In court James does not speak, seems drugged, and seems like he does not know where he is. Many people think he is under some sort of mind control.

Scopolamine is a drug that eliminates your free will. A person appears to be normal but can be guided to do whatever someone else wants and have no memory
of it. Holmes didn't start acting strangely until a few months before the attack.

A 1977 hearing investigating the top secret mind control project, forced the CIA to release files exposing the history of MK_ULTRA. It is the invasion of a person's mind.

James Holmes has exhibited classic signs of an MK-ULTRA subject.

What would be the motive for the government to stage such as massive shooting spree?

Lots more on video, including possible motives, new pieces of evidence and testimonies, and other MK-ULTRA killings.
http://tinyurl.com/9zy49dj or

Nurse Who “Saw Everything” At Hospital After Suspicious Batman Shooting Found Dead at 46
TheEndRun.com
Aug 17, 2012

Jenny Gallagher, a nurse who treated victims of the highly suspicious “Batman” shooting in Aurora, Colorado last month, is dead at age 46. The reported cause of death: drowning.

“She worked the morning after the Batman massacre in a very busy unit of the hospital — so she saw everything really, some really bad injuries,” her husband Greg reportedly told Ireland’s Herald earlier today.
…..
The death of this national heroine does not appear to have been picked up at all by the major U.S. national media. [Note]

Yesterday, nine days after her body was found, an article was published by Ireland’s Herald which finally revealed some information about Gallagher and broke the story of her status as a UCH nurse and witness to the bloody aftermath of the carnage in Aurora.

Why don't you stop posting absolute trash. This woman, a nurse, tragically drown in a family camping trip, and was completly unrelated, just a tragic accident. Idiots like you are what is wrong with the internet, your trash rates right next the the idiot posting the Muslim film.

Aurora Massacre: Disclosure of the facts would cause “untold harm to the case” says Judge

Posted on August 14, 2012 by willyloman
by Scott Creighton

Arapaho County Court Judge William Sylvester denied most of a legal motion filed by a group of news agencies to unseal all the relevant documents in the Aurora massacre case.

1.that there were two gas masks taken into evidence and that one of them was 60 yards away in an area Holmes was never supposed to have been…

5.the explanation of the disclosure of the so-called “stick figure drawing confession” changed 3 times and in the end the prosecution wondered how the media claimed they knew what was in the package before investigators even opened it

6.the fact that according to police transcripts and early reports to the press claimed they had one suspect in custody (drugged up Holmes) and one suspect still on the loose

7.that on July 20th (the day of the shooting) Mayor Bloomberg’s police commissioner Ray Kelly stated that Holmes claimed to be “the Joker” when arrested when in fact, he said nothing of the sort. Bloomberg has been using this case ever since to push for stricter gun control legislation across the country.

8.that ABC News deliberately misrepresented the statement by Holmes’ mother in order to implicate him as the shooter