Within a week of the attack on the Benghazi consulate, I filed a FOIA request to the Defense Intelligence Agency (DIA) to see if they had received intelligence/warnings prior to the attack.

It is now approaching EIGHT YEARS later - and I am still waiting for them to tell me the response.

Although the events became highly politicized, and subsequent hearings "found nothing" -- official documents may actually tell a different story. Or, solidify the line we've been told. 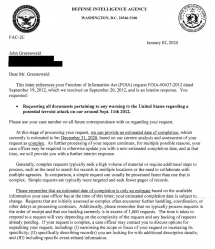 Eight years later and they're still 1,600 cases backlogged; that sounds pretty sketchy to me.  i think they are covering up for global "reset" forces that set this whole system of 'we'll tell you what you need to know' so that ordinary (peasant) people remain under their false rule agenda.