I collaborated with Dr. Alan Kwan, who has a PhD in Computational Genomics from Washington University, to hypothesize what we may look like in the future. The following is written by him…

While the future remains unknowable (for now), Nickolay Lamm produced one set of possible changes to the human face in one possible timeline where, 100,000 years in the future, through zygotic genome engineering technology, our future selves control human biology and human evolution the way we control electrons today. In this future, humankind has wrested control of the human form from natural evolution and are able to bend human biology to human needs. This future scenario and these figures are envisioned by Dr. Alan Kwan, PhD Computational Genomics from Washington University.

As our understanding of the universe increases, I predict that the human head will trend larger to accommodate a larger brain. But instead of some orthogonal evolutionary path that ends up with the 210th century human a la Futurama’s Morbo the anchor-alien, the rule of viable human biology will still apply and so the entire head will trend larger, though with a bias for a greater cranium growth than facial growth; the human 20,000 years from now would look to us like someone today except we would notice the forehead is subtly too large.

By this point, communications lenses will have replaced devices such as Google Glass.

While evolution in space is only beginning to be explored today, I would hazard a guess that millennia of human space colonization of Earth-orbit and other solar system space colonies will also select for…

1. Larger eyes in response to the dimmer environment of colonies further from the Sun than Earth.

2. More pigmented skin to alleviate the damaging impact of much more harmful UV radiation outside of the Earth’s protective ozone.

3. Thicker eyelids or a more pronounced superciliary arch to alleviate the effects low or no gravity that disrupt and disorient the eyesight of today’s astronauts on the ISS.

This human face will be heavily biased towards features that humans find fundamentally appealing: strong, regal lines, straight nose, intense eyes, and placement of facial features that adhere to the golden ratio and left/right perfect symmetry. Functional bias will be incorporated into the vanity driven constraints above. Eyes would seem unnervingly large to us and have “eye shine” from the tapetum lucidum. Sideways blink of the reintroduced plica semilunaris to further protect from cosmic ray effects would be particularly startling.

Nickolay Lamm is fascinated with trends in the technology and business world, often illustrating these interests in illustrations. He graduated the University of Pittsburgh’s College of Business Administration in 2011 and his life goal is to create a startup which changes the world.

I'm just glad that tee-shirts won't change in the next 100,000 years, and that hair cuts will be exactly the same. 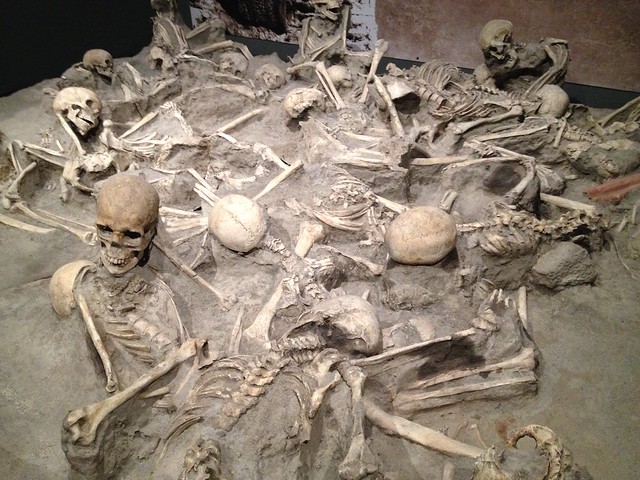 The chick actually looks better in the 20K pic.

Martial Law is real, TPTB have been practicing.
Must watch video, especially for Canadians: Into the Fire - See what actually happened at the G20 Summit in Toronto.

only because they ascended and didn't need their [hysical bodies anymore..it could happen
seriously though..
if we should, somehow, make it..
maybe something, like something from the Island of Dr. Moreau, OR..like the GRAYS (Bwa! Ha! Ha!)

Well, the 60k future tan is already there in New Jersey, and most of the dbags in the nation 😛

It would like any regular server does. A box containing a weapon called truth.

Have you ever seen "Wall-E"? Great movie, were all fat blob's that can't handle gravity, living on a space ship in little gravity. But actually I feel that mankind won't be here. Ice age or comet strike. Some sort of man made virus or nukes. I do see something like that happening.

maybe we can download a person into a big computer where they live on.
Maybe that's how AI has a proof of concept.

The brain will evolve not just the physical features, the so called "psychic" abilities will be a normal ability which is what they are. Any creature will adapt to the environment they are in, so it will depend on the conditions that we are living in at that time.