Note that the description of the payload is, a satellite for "National" reconnaisance. Greeney, this is your stomping grounds... any thoughts? Some people suspect this is a much bigger deal than it's being portrayed as. I saw on TV that the satellite is purported to have the ability to see through cloud cover, etc. It's something really sophisticated, perhaps unprecedented. If this truly is for "national" recon, it's odd that we would dedicate such superior technology to watching what our citizens are doing rather than other folks who plot against us.

I guess in the grand scheme, it's not THAT big a deal, seeing as how every move people make in the UK is recorded on traditional closed-circtuit TV cameras (there are about 2 billion such cameras in operation today). If this satellite is watching what is going on in the US, it's just one giant camera as opposed to 2 billion little ones.

Let there be no doubt... Big Brother is in full swing.

A Delta 4 rocket is poised for blastoff this afternoon from south Vandenberg Air Force Base, where crews this morning retracted the mobile service tower from its place protecting the rocket.

The team is counting down to a liftoff at 4:12 p.m. today from Space Launch Complex-6 on South Base.

Mother Nature appears ready to cooperate with the liftoff attempt - launch weather officers are calling for just a 40 percent likelihood that conditions will force a postponement.

Liftoff has been delayed since Thursday so that crews could analyze a potential problem that they has since been resolved.

The United Launch Alliance rocket will carry a top-secret satellite for the National Reconnaissance Office. 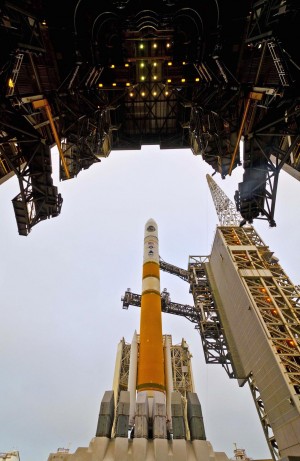 I have no idea what the payload is but I knew about the upcoming launch, and thought about driving up to view it from public viewing areas. I would be about a 2 1/2 hour drive up to Vandenberg.

What I can tell you, is this was one of my main programs at Rocketdyne, and I did a major amount of welding to each of these RS-68 engines. I welded many of the main fuel duct assemblies, that consist of about 12 welds each which I programed robotically and preformed the welds. Each takes about a year to build and probably cost around $1million dollars alone, each engine has a fuel and Lox main duct. They have several metal accordian bellows in them that are supplied by a vendor, each one costs at least $50,000. Also may have welded many of the outriggers that attached the engine to the rocket, plus some of the main combustion housings.

I helped develop the welding parameters and schedules for welding these 1/4 wall thickness 6" dia inconel material ducts, in a single pass weld. The program to do this robotically was very complicated, how we programed to start the weld, establish penitration, and stop the weld was even a harder challenge. We developed a internal pressure argon system, that was unpresidented and the only way you could do a weld like this in a single pass. I programed the robot to follow each one, which was not concentric or round, and each one being slightly different, so each was like a new part. The ducts were so big, we used a special robot that required you to go up on a platform lift to be high enough to view the weld, while the engineers monitored the argon pressures that changed with the heat, while you welded.

This rocket was the verson that used 3 of the RS 68 engines, so it was a heavy lift version.

If you look at the views of the rs-68 engine, you can see what is a large looking pipe, which is the main fuel ducts. They are about 12 feet in total length and make several turns and bends, there are 2 of them, but the Lox duct is harder to see. In the middle of the pipe are 2 accordian metal bellow pieces to allow for vibration in each duct. Also the main combusion chamber is the area just above the thrust nozzle. that is probably about 5 feet in diameter. The views showing the blue painted supports are the outrigger pieces, that are 4130 chromeMoly material.

This is just a little glimse of what my world was for 30 years. It was the best welding job anyone could ever have. We called it the Cadillac of welding jobs, because Rocketdyne wrote the book on the leading edge of welding technology. We invented the processes to make our space program even possible. We pioneered may firsts in welding, and one of the things I'm proud of from my time, is making the first production Robotic TIG weld on the space shuttle main engines. Without the advances they did in Electron beam welding, and inertia welding, the SSME main combusion chambers or main power heads could not have been built. Rocketdyne was the first company to develope robotic TIG welding, which I got into in 1985 at the urging of one of my welding engineers. Best thing I ever did, because I got to work in the real development part of all the programs, converting most of the most difficult or problem weld joints into robotic proceedures. I really do miss those challenges.

"frrostedman" wrote: If this truly is for "national" recon, it's odd that we would dedicate such superior technology to watching what our citizens are doing rather than other folks who plot against us.

A lot of our citizens are plotting against us.

I assume they monniter the crap out of us and have for years, now..and not just them..but corperations..media and news outlets..heck..regular folks who have access to this stuff..you know who you are
😛

Yes, I think so...things like enabling gps on your phone enabling the man to monitor your whereabouts at all times...just another example.