The real stuff is beginning to hit the fan. Personally I think it's because someone has finally found out just who this guy is in bed with and why they are spending Millions of their own personal wealth in an effort to get him elected.

ABC for one has had a story on Mitt for over a year----Killer story--so far they've refused to run it. So this week some FBI-CIA-Intelligence agency personnel decide to leak it to those who are in a position to publish it.

The bottom line is that Mitt ( it has been documented ) by said personnel, is a shady business man and into things that would refuse him any chance at being president.

Anyway---today the Guardian is running a piece on Mitt's biggest donor----it's said that he's spent about 1 billion in the effort to get Mitt in the White House. This should raise a few red flags.

Yes this has been posted on a few intel sites, and talked about in detail for over six months now-----So why NOW? Why the Guardian and no US Media?

Sheldon Adelson's billions shape US politics as many question his influence

Casino mogul is sparing no expense to get Romney elected, a win that would benefit his businesses and his bank account 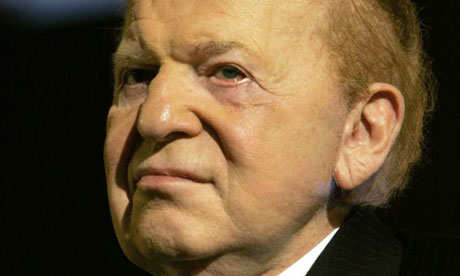 Every day three scenes, on the surface unconnected, unfold in different corners of the world. By breakfast time in Macau, China's gambling mecca, thousands of people are inside vast casino resorts spending money on baccarat, poker, slot machines and restaurants. Managers monitor the profit by the hour.

By lunchtime in Israel commuters and shoppers are perusing Israel Hayom, a brash giveaway tabloid and the country's most-read newspaper. It supports the government of Binyamin Netanyahu. And it clobbers rival dailies to the point of extinction.

By dinnertime viewers in Florida, Ohio, Colorado, Nevada and other swing states in the US presidential election are watching, for the umpteenth time that day, television advertisements attacking Barack Obama and promoting Mitt Romney. Their volume and cost have set records.

This eclectic, global triptych is connected by a fourth, less visible scene. In the quiet hum of his air-conditioned Las Vegas headquarters a short, portly man with thinning red hair absorbs reports detailing it all, Macau, Israel, the election, because in every one he is a player. He crunches the profits, circulation and polling and ponders his next move. His name is Sheldon Adelson, and he is one of the world's richest men.

"I suppose you could say that I live on Vince Lombardi's belief. Winning isn't everything, it's the only thing," he told a recent interviewer, citing the legendary American football coach. "So, I do whatever it takes, as long as it's moral, ethical, principled, legal."

Now a key paragraph----It's almost as if these people within the Media are walking on egg shells when it comes to this guy....

No one doubts Adelson, 79, lives to win. But with the White House race entering the final stretch of what both sides call the most important election in decades there is growing controversy over his business interests and methods.

I'm not going to speak of these " INTERESTS AND METHODS " Why? He's under investigation ( it has been said by those in that line of work ) for things that if a decent person knew of, would make it impossible to accept money in an effort to become President. Yet Mitt------------well I leave the rest to those of you who care enough to read it.

LOL. For the record, yes, I clicked on the link and read it.

Is that all you got? Wow, liberals are more worried about Romney's win than I thought.

Come on, this is an obvious attack on "Mr. Hot Shot Casino" and Romney. Obama rates well outside of the states, due to his weak policies and him bowing to every corner of the world. Of course the world wants to see the U.S. weak, and Obama sitting in the White House makes them all salivate. But really? The Guardian posts this article and that convinces you Mitt Romney is "Mr. Bad Corrupt Businessman"?

I'm sorry, if there was VIABLE EVIDENCE that proved that, our (U.S./American) largely left-leaning media would be all over it. ALL OVER IT, and you know that as well as I do.

You do know that I'm a High School drop out, right! 😉

It's why when I post something I'm immediately labeled a LIBERAL! 🙄

You sure do love Duff don't you? 🙂

Oh, and I will say this. Forgive my "assumption" you were/are a liberal. Your tone does lean that way, but please, feel free to correct me if I am wrong.

There was something that has occurred, not recalling exactly what it was, concerning Obama and Las Vegas, that really riled up Vegas. It is not surprise they would be big supporters of Romney. I'll see if I can find what it was, but it was a major blow to their economy. Lets face it the economy alone has hurt big tourism centers, so they would want Obama out.

Obama's comments about Las Vegas are one of the motivations for big donations for Romney, Las Vegas has one of the biggest unemployment rates of any city, and Obama's comments did not sit well with them. Vegas knows that with Obama, the Vegas economy along with many big city's in Nevada will continue to go in the tank.

"blackvault" wrote: Oh, and I will say this. Forgive my "assumption" you were/are a liberal. Your tone does lean that way, but please, feel free to correct me if I am wrong.

First of all the above is a bit " smug " Wouldn't you agree? Second, I've never understood the adolescent attitude when it comes to Conservative vs Liberal bullshit....It is all just Bullshit, right....or is it something more. Seems a waste of valuable time to piss and moan about who's who, who's right, and who's wrong...but that's just me.

Myself, I try to live in the middle yet find " BOTH SIDES " make that very very difficult....You see the extreme's of each have an absolute agenda, one etched in freaking stone. Neither gives a damn about REALITY, especially when it goes against their BRAINWASHED BELIEFS.

Wish I could be a bit clearer, more specific, but at the end of the day what would be the point. You're going to go on living as you've been led to believe, as you were raised, comfortable in all that is familiar. You agree with this, Yes.

Am I saying this is a bad thing, or that you're damaged in some way....absolutely not....Just pointing out the oh so obvious. You believe as you do based ( in my opinion ) on what you think, not what you know or care to admit that you know.

As for this thread.....It's been revealed that Romney has ties to crime and corruption galore. Does this mean that Obama is squeaky clean " absolutely not " It's obvious Obama is a " CIA " man through and through....It's how he rose to power, how he got elected, and how he will ultimately be re-elected. Personally I believe him to be the lesser of two evils....The very best thing he's done is shun the Israeli's, only that nearly got his commander of the Joint Chiefs killed while on a visit to Afghanistan. 😉

Romney's # 1 donor claims he doesn't want any favors for his billion or so in support...Well I sure he's being honest 🙄 His real interest is having the criminal elements of his empire disappear, only that cat has long been out of the bag. Only his influence within the Jewish owed MEDIA has kept it from being broadcast on your TV set, or radio.

He wants war with Iran, as do all of the extreme right.....It's big business for them, easy money so to speak...and yes as people are brainwashed into believing that Iran is going to build and use a Nuke the task of pulling it off isn't so difficult.

Anyway...........Duff does what some in my family have done over the years, maybe that causes me to be partial, or maybe it's because I understand how intel and counter-intel actually work. Anyway........Sorry for length and hopefully you've better understanding of my position.

I come down on the side of common sense and reality, as well as the law...especially when it relates to the people...you know, those these clowns are elected to represent once in office. So why do you support those who think they are above the law? That's the issue here, isn't it?

Last thing.....I'd appreciate it if you remember that you're speaking with a well seasoned senior citizen....One who's seen and done more than 99% of anyone you'll ever meet.....So what does that make me....a self absorbed JERK, or an honest old man!

Cole: What does being a "well seasoned senior citizen" mean, other than the obvious? Does that mean my opinions are any less or more relevant than yours? And you talk about me being, "smug?"

You also claim, "You're going to go on living as you've been led to believe, as you were raised, comfortable in all that is familiar. You agree with this, Yes."

Actually, no I don't agree. Yes, my mom and dad instilled some pretty awesome morals and values that I am forever grateful and as a result, live a beautiful life. But respectfully, I am also not a lemming to their every belief or idea. Dad / Greeney2 can tell you he and I have had our differences over some issues... some of which that have gotten heated here at the kitchen table in my home, vs. in cyberspace here on the board. Actually, I think I have went after him on a few issues here in the past 🙂 So, there are differences.

You can draw the comparison about me all you'd like, but when it comes down to it - you don't know. And to assume otherwise, is... how did you put it? That's right, "smug."

I got respect for you, Cole. I respect everyone on here taking the time to learn. But age, or a single newspaper and journalist you love to quote, will not negate what quite a few journalists, newspapers, media outlets, researchers (like myself) and THE FAMILY OF THOSE THAT WERE KILLED IN BENGHAZI. You can't just simply whisk all of that away as extreme, war mongering, right-wing lies... simply because it doesn't agree with your "facts." Yes, I did want to throw Benghazi in because it's the same as Romney being such a big, bad, corrupt, Republican.

I also love how you tout the big money being thrown Romney's direction, and yet, isn't Obama outspending him by... MILLIONS? Actually, it's over 100,000,000 dollars. Source: http://elections.nytimes.com/2.....gn-finance

Point being? So Romney has some big donors... well, I can assure you, Obama has quite a few himself. And if you'd like to throw the assumptions Romney's way - throw them to Obama, too. It's deserving.

"Cole_Trickle" wrote: Last thing.....I'd appreciate it if you remember that you're speaking with a well seasoned senior citizen....One who's seen and done more than 99% of anyone you'll ever meet.....So what does that make me....a self absorbed JERK, or an honest old man!

Honest old men do not post pictures of people smiling, and make up some scenario that is untrue, when the caption they omitted tells the entire true story!

You are about as well seasoned as a blowhard know it all!