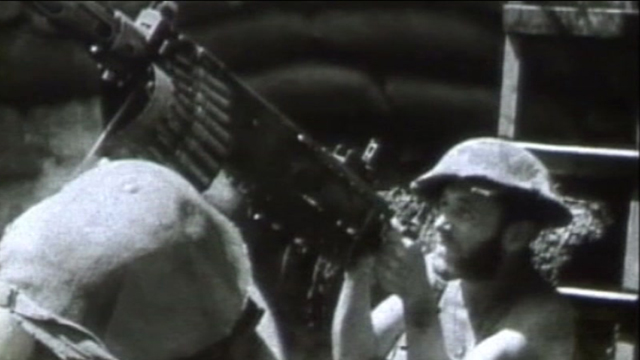 It's 70 years since Japanese bombers swooped on Darwin, in northern Australia, sinking Allied ships in the harbour and killing hundreds of people. For years the attack was rarely mentioned, but now the story is finally being told.

If 7 December 1941 is "a date that will live in infamy" for the United States, then 19 February 1942 is surely one that will join it in the annals of shame for Australia.

That was the day, just 10 weeks after the attack on Pearl Harbor, when the same carrier-based Japanese force turned its attention to the small northern town of Darwin, with equally calamitous results.

But the world remembers one and barely recalls the other.

The seven-volume Official History of the Australian Army in World War II devotes only two pages to the attack on Darwin.

Yet in truth, Darwin was Australia's Pearl Harbor - a morning attack carried out on an unsuspecting population that ended with the deaths of hundreds of people and the sinking of numerous Allied ships

We could see the red dots on the side of the aircraft, they were so low”

But it's only now that the story of Darwin has been given the same kind of historical attention that's long been focused on the attack on Hawaii.

There are many reasons for this. Chief among them are that:

it happened just three months after Pearl Harbor and was overshadowed by it
communications out of Darwin were poor and it took time for the news to filter out
the Australian authorities played it down, for fear of provoking national panic

On the day itself, the first wave of Japanese bombers was spotted over an island north of Darwin half an hour before the attack, but they were mistaken for American Kittyhawks.

It wasn't until a few seconds before they dropped their bombs that the first siren in Darwin was sounded, and this delay added to the casualty toll.

Over the next 40 minutes or so, some 188 Japanese aircraft strafed the docks, ships and surrounding town.

"We could see the red dots on the side of the aircraft, they were so low," says Margaret Herron, an 11-year-old girl at the time.

"We thought they were dropping silver bells, until we realised they were bombs. I was terrified and ran to shelter in a quarry."

It is not hard to make the case that when war came to our shores with the bombing of Darwin on February 19, 1942... Australians behaved abominably.

There was panic, looting, cowardice, desertion and a stampede south to get out of harm's way.

Yet we could ask ourselves today: If you were under attack from waves of Japanese aircraft dropping more bombs than fell on Pearl Harbor, were unprepared, had not received any training drills, had no warning, had no leadership and feared imminent invasion, might you have behaved in the same way?

It took many years for the awkward truth to emerge about the panic and abject failure of leadership following the bombing. By any analysis, it was not a good look. Yet the negative truth masked other, equally true, stories of courage and heroism among soldiers, sailors and civilians alike.

By the time the Japanese left, eight ships had been sunk - including the American destroyer, the USS Peary - 22 aircraft destroyed, dozens of buildings crushed and more than 240 people killed.

It was the worst wartime loss of life on Australian soil in the country's history.

More than 60 other aerial bombardments would follow, up until November 1943, but none as destructive as the first.

"It was a disaster," says Dr Tom Lewis, a historian and director of the new $12m (£7.6m) Darwin Military Museum.

"Australians had been fighting in Europe and the Far East, but now the war had come to us. We had never experienced anything like it."

What followed next helped account for the raid's absence in the Australian consciousness for decades to come.

First, Darwin had no telephones. This frontier town, of about 4,000 people at the extremities of a vast continent, had to rely on the telegraph to make contact with the outside world, so news of the attack was fragmented and inconsistent.

Second, there was a panicky response by the population and by some in the military, with an unseemly scramble to get away, for fear of a Japanese invasion.

Third, there was a shocking lack of leadership among the civilian administration and the military, which compounded the sense of chaos and incompetence.

It was a somewhat ignoble record - one that not everyone wanted to see in the history books.

A sense of partial anarchy prevailed in the hours and days immediately after the raid.

By the time the Japanese left, eight ships had been sunk - including the American destroyer, the USS Peary - 22 aircraft destroyed, dozens of buildings crushed and more than 240 people killed.

It was the worst wartime loss of life on Australian soil in the country's history.

yhe, this is a big day every year an it's just getting bigger an bigger on the national calendar.

Surprised Joker didn't post something .... you know .... with him being Australian and all.

But then he never posted anything for Australia day either.

BTW My Late Uncle Rudy Warzenski was over in Australia in Late 1942 with the US Army and helped with the relief and general assistance to the residents.

Very heartbreaking according to him and the Bombing of Darwin is featured in the Nicole Kidman film AUSTRALIA !