Obama is a SOCIALIST PIG

I cannot believe all the people who blindly elected this loser of a person as President. These days into years are the darkest days of America. I loathe the left and their mental midget minions.

Look at all the love for Chavez, but not for the Right or returning war heroes.

This man, this non American deserves to be removed from office promptly.
http://uk.reuters.com/article/oilRpt/id ... 8420090417 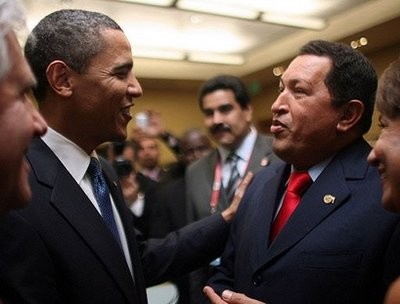 (Updates with remarks from presidential palace)

PORT OF SPAIN, April 17 (Reuters) - U.S. President Barack Obama on Friday greeted and shook hands with Venezuela's President Hugo Chavez during an impromptu meeting with the anti-U.S. leader at the Summit of the Americas.

Photographs released by the Venezuelan government showed Chavez, a fierce foe of former President George W. Bush, smiling and clasping hands with Obama at the start of the summit of Latin American and Caribbean leaders in Trinidad.

"I greeted Bush with this hand eight years ago; I want to be your friend," Chavez told Obama, according to a Venezuelan presidential press office statement.

Chavez, a staunch ally of Cuba, had became one of the Bush's administrations most strident critics. In March, he called Obama at best an "ignoramus" after the U.S. leader said Chavez obstructed progress in Latin America.

Ties between Washington and Caracas have frayed under Chavez, who often accuses U.S. officials of trying to topple him. Chavez expelled the U.S. envoy to Caracas in September in a dispute over U.S. activities in Venezuelan ally Bolivia.

Former soldier Chavez says socialist revolution can counter U.S. free-market policies in South America and he has become a standard-bearer for anti-U.S. sentiment in the region. But Washington has branded him a threat to regional stability. (Reporting by Patrick Markey; Editing by Eric Walsh)

Math, science, history unraveling the mystery, that all started with a Big Bang.....BANG!!

Look at all the love for Chavez

"I greeted Bush with this hand eight years ago; I want to be your friend," Chavez told Obama,

So you felt the same sentiment when he shook hands with GWB?

In March, he called Obama at best an "ignoramus" after the U.S. leader said Chavez obstructed progress in Latin America

Oh the things these 'lovers' say to each other is so cute. ðŸ™„

Ties between Washington and Caracas have frayed under Chavez, who often accuses U.S. officials of trying to topple him.

Chavez is obviously insane. The USA never does that.

Math, science, history unraveling the mystery, that all started with a Big Bang.....BANG!!

Jaack. You're clearly upset, I mean, you may well have reason to be. But hey, you fear for your country, so regardless of what the reality of the situation may be, one way or the other, your cause is noble.

But what about all the people that told you that they feared that their country is going astray with Bush? It's the same thing.

And to prove you're seeing things slanted, Jaydees has pointed out that (In the very article you posted) Bush shook Chavez' hand eight years prior! Too which, of course, you had no complaint. Probably had no knowledge of it either.

"George Bush says he speaks to god every day, and christians love him for it. If George Bush said he spoke to god through his hair dryer, they would think he was mad. I fail to see how the addition of a hair dryer makes it any more absurd."

Chavez is obviously insane. The USA never does that.

So anything the US doesnÂ´t do is insane?
Is that what you think or are you just another jaack wannabe? ðŸ™„

i think there should have been a ðŸ™„ on the end of that Saturos. Meaning sarcasm. ðŸ˜‰ ðŸ™‚

I wasnÂ´t sarcastic in the first sentence...

`Chavez is obviously insane. The USA never does that. ðŸ™„ `

Barrack Obama (aka "George Bush III") is not a socialist. No respectable socialist party will ever claim him. Point of fact, the socialist parties don't like him.