All the story came from the media and authority. So far no witness' field report. It is just like "Operation Geronimo". They let "seal" gave different stories which often conflicts each other. It looked like they try to kill all witness as possible as they can. Include Nancy Lanza who might prove something different from official story.

Have you noticed that Adam Lanza wore a mask?
Do you know that James Holmes wore gas mask in Colorado theatre shooting?

Nobody could recognize who actually did the shooting.

According to the official story, Adam Lanza was found with his older brother’s ID, and it was not stolen. However, older brother Ryan – whom officials say is very cooperative – claims not to have even seen his brother since 2010. Where would Adam get this ID? And why does such use not qualify as a theft?

According to the official story, Adam Lanza was wearing a black outfit with a mask and bulletproof vest. Why would he want to hide his identity, and why would he wear a bulletproof vest if he planned to kill himself?
http://www.washingtonpost.com/blogs/wor ... -shooting/

The suspected Colorado movie mass murderer was a loner and a grad school dropout who described himself last year as “quiet and easy-going” on a rental application.

Holmes, who wore a gas mask and black full-body armor during his attack, was not a military veteran and had no ties to any terrorist groups, officials said.

Another coincidence is that 2 Mass Shootings from colorado and connecticut Connected To the Libor Scandal:

KILLER DOES NOT APPEAR TO BE JAMES HOLMES - JAMES HOLMES BEING USED IN BLACKMAIL OF ROBERT HOLMES FINANCIAL FRAUD DETECTION EXPERT FOR FICO IN LIBOR SCANDAL.
James Holmes father Robert Holmes, was said to have been scheduled to testify within the next few weeks before a US Senate panel on the massive banking crime called the LIBOR Scandal where UK banks fixed the London Interbank Borrowing Rate with the complicity of the Bank of England, the US Federal Reserve (which knew about this crime for 4 years and didn’t report it) and many other major Western banks.
http://anoncentral.tumblr.com/post/2810 ... bank-fraud

Mass Shootings Connected To Libor Scandal – THIS IS A HOAX STORY
Posted on December 17, 2012 by jischinger

The father of Connecticut school shooter Adam Lanza, Peter Lanza, was the tax director for General Electric, a corporation that paid -0- taxes on 14.2 billion dollars in profits last year. According to Fabian4Liberty, Peter Lanza was scheduled to testify in the ongoing global LIBOR scandal. In what could only be described an amazing coincidence, the father of Colorado Batman shooter James Holmes, Robert Holmes, was also a LIBOR witness in his position with FICO. According to the link at FICO, Robert Holmes was a ‘Fraud Scientist’

----------------
Libor scandal is a profitable business. US makes a lot of money (fine) from it. That's why two witness' sons were both involved in mass shootings. That's a blackmail.

UBS hit by $1.5bn fine over Libor case
Published: 19 December, 2012,
Switzerland's largest bank UBS has agreed to pay $ 1.53 billion in fines to US, Swiss and British financial regulators in order to settle investigations into the Libor interest rate manipulation.

Barclays was fined £290m after an investigation into claims that several banks manipulated the Libor rate at which they lend to each other. Chancellor George Osborne, meanwhile, raised the possibility of criminal charges against guilty bankers.

The plot thickens. I knew there had to be a connection between the two and here an investigative figure made the connection. As per usual, the gun control debate serves as a smokescreen.

The purpose of two massacre is to wage a gun ban. But when they chose the plot sites and particpants, they framed two families which relate to the Libor scandal. Holmes family and Lanza family have no motive to leak the message that their sons involved in the case. No other but the Feds would release such information.

1. The two shootings aim at gun control, especially the Sandy Hook school shooting. Which you can see from the eagerness of Biden and Obama to push for a new gun ban. It may indicate that in coming future, there would be a created terror attack on American. They try to prevent the resistance from people because most people lost trust on this government after 911.

2. While to take over the gun rights from people, the Feds never forget to make money on these plots. So the information of two alleged shooters connect to Libor scandal were released. It was not necessarily targetted only on two families. It could be used on other witnesses too.

Power and money, are the target of the perpetrators in this two shootings.

A question to ask all gun control supporters... "How is Mexico's gun ban on civilian ownership working out?"

Most can't give a decent answer, will resort to name calling, insulting or change the subject.

Remember, resorting to name calling, insulting, yelling, etc... just means you are out of intelligent things to say.

“He said, ‘Tommy, I guarantee you, we’ll get it done by the end of January,’” Menino reportedly said at City Hall on Thursday. “They’re going to get it done.”

In this case, Adam Lanza and his mother, could be victims of the plot. Lanza had no motive to commit such a crime. Government has. They are pushing for a gun ban. It’s hard to ban all kinds of guns. So the first step is to ban the “Assault weapon”. That’s why they insisted that the gunman used a rifle. By common sense, it’s easy to use hand gun to shoot inside a building. It’s rare to see people use rifle to commit killing inside rooms when they have hand gun as choice.
------------------

No others could do Sandy Hook massacre except the Feds because so many resources were activated: police, media, government officials and informants (some were called as "actors" by people.) And they of course would let out disinformation to meddle the water.

Robbie Parker was pushed out as a trap to discredit “Sandy Hook truthers”. Mr. Parker was selected because he has three look alike daughters, all with blonde hair and you can hardly recognize them if the picture was taken in a few years.

Here is a doctored picture. Madeline and Samantha have no legs in the photo. It was cut and replaced by other stuff. That two legs on bottom part is from another photo. The size and location does not fit Robbie Parker’s body. 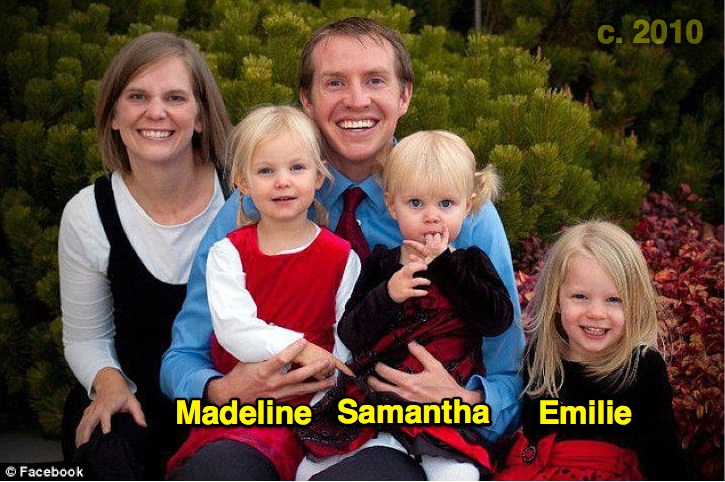 And they deliberately let Madeline wearing Emilie's dress in photo with Obama. Let her in Emilie’s hair style in picture one too. The dress and hair style were designed to confusing people (that Emilie wasn’t dead) then to prove the suspicious people are "conspiracy theorist". Remember, no others have the motive and resource to do that. Those who could take pictures of Obama and Samantha have the privilege or that photo was a product of the "strategy office"(disinformation office) too. 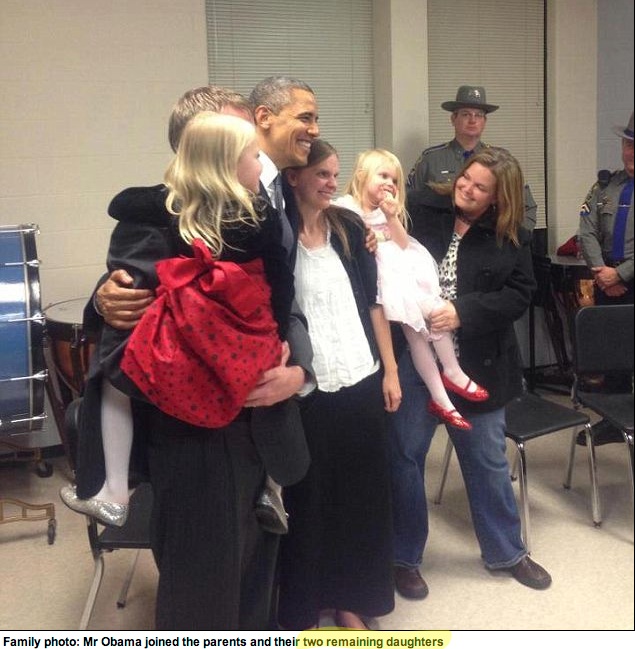 ---
That picture was created particularly to mislead people to conclude Emily hadn't died. (they let Madeline wear Emily's dress) That's a trap set up for suspicious people. It proves even the president could be obedient actor to be manipulated by the perpetrator. See how happy those actors are. Are they family members who just lost a lovely girl and after memory service, or it was a celebrating party?

Government monopolized the news agency. They censored the important news of Sandy Hook shootings. Sandy Hook - Judge seals police records for 90 days. It helps to fume suspicion of people. Why did they release so much inconsistent information on Sandy Hook shooting?

Do you know why they released the following news (MANY 9-11 "HIJACKERS" ARE STILL ALIVE)? Because there are many people work for government as informants. They are afraid of becoming sacrifices when they were told to carry out a mission. So the late news (hijackers still alive) released to comfort them. Now we saw so many disinformation released later after Sandy Hook shooting. It hints "we didn't kill that many children". That's the trick how the government fool you the people.

The world's media has reported that many of the so-called hijackers "fingered" by the FBI are still alive. For example the BBC (British Broadcasting Cooperation) carried this report:

The following article is a remake of http://www.mujahideen.fsnet.co.....ackers.htm which lists many of the media articles dealing with the hijackers who were not hijackers.
http://guardian.150m.com/september-elev ... -alive.htm