Insult to WWII heroes: Graves of British troops smashed and desecrated by Libyan Islamists in protest over U.S.

A furious mob has desecrated dozens of Commonwealth War Graves in a Libyan cemetery amid continuing fury in the Middle East over the burning of the Koran by U.S. soldiers.

Protesters rampaged through site on Friday, despite efforts by America to calm tensions sparked when it emerged U.S. soldiers had burned Muslim holy books in a pile of rubbish at a military base in Afghanistan.
Gravestones

Desecrated: The headstones commemorating the deaths of allied servicemen, who fought in the Western Desert campaigns between 1942 to 1943, lay smashed on the ground
Sacrifice: Some 1,214 graves are marked in Benghazi War Cemetery

Sacrifice: Some 1,214 graves are marked in Benghazi War Cemetery 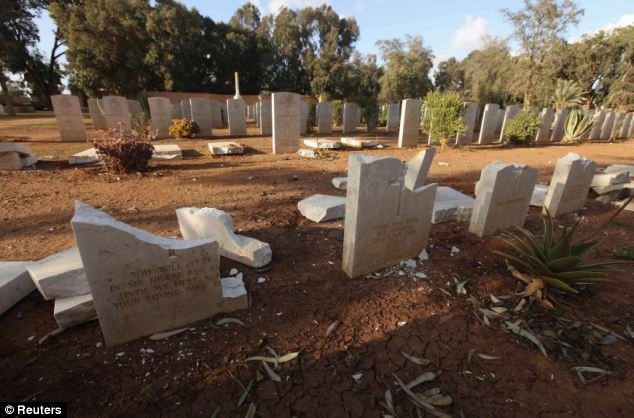 President Obama has apologised to President Karzai for the unintentional burning of the Korans at NATO's main Bagram air base after Afghan labourers found charred copies while collecting rubbish.

White House spokesman Jay Carney sought to counter criticism, telling reporters on board Air Force One: ‘It is wholly appropriate, given the sensitivities to this issue, the understandable sensitivities.’

Twelve people died today during the bloodiest day yet of protests over the incident.

Immediately after news broke of the incident, more than 2,000 furious Afghans - some chanting ‘die, die foreigners’, other throwing rocks - gathered outside the giant US air base at Bagram, 40 miles north of the capital Kabul, as reports of the burning spread.

Military sources said that books were removed from the library of a nearby detention center because they contained extremist messages. Prisoners had been writing in the books as way of communicating.

There were immediate fears the Taliban and other insurgent groups would try to exploit the claims, using it as a rallying call against US, British and fellow Coalition forces.

The protests come as the FBI announced it has removed hundreds of pages of training documents that painted inaccurate or stereotypical views of Islam.

The counter-terrorism training materials referred to the Prophet Muhammad, the founder of Islam, as a cult leader and included graphs that implied devout Muslims got more violent throughout history, while Jews and Christians became less violent.