Hurricane Sandy set to make history as it aims at U.S. coast
Page: 1234

I thought it was meant to be a franken-storm.

Have you ever experienced a hurricane? It's 1,000 miles in diameter,

Cyclone Yasi was only a category four storm,

How Cyclone Yasi compares around the world! IF you're struggling to grasp the magnitude of Tropical Cyclone Yasi, consider this: it is so large it would almost cover the United States, most of Asia and large parts of Europe.

Most of the coverage about the scale of Yasi has tried to compare it with storms of the past - it's bigger than Larry, more powerful than Tracy.

But just as powerful is this comparison, showing this storm is continental in size. The main bloc of the cyclone is 500km wide, while its associated activity, shown above in a colour-coding to match intensity, stretches over 2000km.

The storm's scale of destruction is as shocking as it is inevitable. In the map above, the United States from Pennsylvania in the east to Nevada in the west, from Georgia in the south to Canada in the north and well into Mexico would be battered with 300km/h winds and up to one metre of rain.

The economic impact would be felt around the world.

This map shows the impact if the storm was attacking Asia: Again, the scale is unthinkable - taking in an area from Japan, the Koreas and China all the way through southeast Asia, around through India and the Himalayas and threatening large parts of central Asia.

This would have billions of people directly in the path of the category 5 storm, creating a human tide of displaced cyclone "refugees".

This map shows the storm over western and central Europe: Just as we saw in our visualisation of the Queensland floods, the whole of Britain would be overwhelmed.

But this time, France and Germany would also be catastrophically affected, delivering another body blow to the European economy at the least and also disrupting the lives of hundreds of millions of people.

Even the eye of Yasi is as big as a city. This next map shows the heart of the storm over New Orleans, covering Louisiana and neighbouring states.

The eye of the storm is itself, over 35km across, & it would stretch over all of the Katrina-ravaged city's centre. In the maps below, you can see Shanghai and New Zealand's north island bearing the brunt of category five. 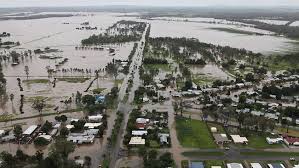 & before my time, there was Tropical Cyclone Tracy, which wiped out the entire city of Darwin on Christmas Eve/Day 1974. 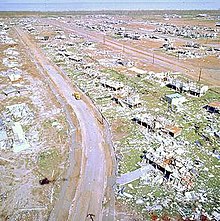 Here is a few of the 3-6 Cyclones Australia gets each year. ( this is just Cyclones ) not floods or bush fires, droughts ... ect ect.

Know-body is saying that this is not a big storm.

This is a massive storm.

But this will be good for the U.S economy, in the same way Cyclone Yasi, & the Jobs that were created to rebuild Australia's east coast,helped boost Australia's economy back in 2010 - 2011.

The Rebuild of the USA will help reduce the U.S unemployment numbers, & will also boost new spending.

Unless the cost of the re-build sends the usa further into debt.

But the issue is not the storm here, ..... this storm is no bigger than other storms seen around the world .... & storms like this are only going to be seen much more often.

& when mount Fuji in japan blows it's top, we will forget all about Sandy ( the tropical storm )

& when the USA does start to re-build, lets hope those new building are of a higher standard. maybe to with stand a category 4-5 like Australia has & not fall over at the first sight of a tropical storm.

Just that you need to put it in perspective.

Your first reaction, was to assume this is the worst storm ever, & that i must not have ever been in a hurricane/Cyclone. myself

That just shows your ignorance & how much of an ultra nationalist you are.

As of now Hurricane Sandy, is not even a Hurricane anymore.
It's just a tropical storm, & i see tropical storms for six months of the year, every year' in Northern Australia where i am.

On a cold day it's 35 degrees Celsius ( around 100 degrees Fahrenheit ) with 90 percent humidity.

Sandy is not a big storm, not by any standard, However even tho the hurricane was small, the over all weather pattern is quite big.
& i bet it's as cold as all hell. ( by my standards at-least )

Sandy, dubbed "Frankenstorm" because of its Halloween timing, was downgraded on Tuesday (Australian time) from a Category 1 hurricane to a tropical storm.

It has affected an estimated 12 states and 60 million people.

The professor of Physical Geography at James Cook University, Steve Turton, says the size of Sandy, and the population density in its path, made it a once-in-a-lifetime event.

"The diameter of the storm-force winds is the same as going from Brisbane to Cairns," Professor Turton told AAP.

"And on the edge of that you've got gale-force winds as well so it is a massive system, possibly even bigger than the state of Texas."

While Yasi packed a single punch, Sandy is delivering a different type of damage pattern.

"It'll produce multiple storm surges until it finally weakens out, whereas Yasi just produced the one single major storm surge that went through the Cardwell area," Prof Turton said.

"And while Yasi was big by our standards, and more severe in intensity near the centre, it probably only covered a quarter of the area Sandy is covering."

Prof. Turton said comparing cyclones or hurricanes was difficult as each one is different.

"Cyclone Tracy for instance was very destructive and stands out in Australian memory - we'll never forget it - it is part of Australian history," he said.

"Tracy was only about 60 kilometres in diameter but it was devastating because it hit Darwin straight on."

The associate professor of Meteorology at the University of Melbourne, Kevin Walsh, agreed that the population density in the northeast coastal area of the US made the impact of the storm more deadly.

"Hurricane Sandy has maximum wind speeds that are considerably lower than those experienced in cyclones Yasi or Tracy," Professor Walsh said.
"But it is striking a much more densely populated region."

The Bureau of Meteorology said while wind speeds in Sandy reached 150 kilometres an hour, Yasi posted 205km/h.
And while maximum storm surges from Sandy were forecast at 3.3 metres the surges associated with Yasi had been recorded at 5.3 metres.

"This is not the largest storm ever seen - that title still rests with super typhoon Tip which swept through the Pacific in 1979," Prof Turton said.

"Tip is the largest and most intense tropical cyclone ever recorded. It covered around 2500km and holds the world record for lowest sea-level pressure."

I hope everybody in this storms path is well & safe, & best of luck to you all.

The storm passed through my neck of the woods last night. It wasn't too bad, most of the storm dissipated after it his the coast. But I know some places got hit pretty hard and there are now millions without power. NYC got nailed pretty good too. Here are some photos of the flooding
http://latino.foxnews.com/latino/news/s ... ed#slide=6

rath, the reason why there was so much attention given to sandy was because you literally had half of the eastern seabord under threat of flooding. That's close to 75 million people. It's not propoganda, its simply a lot of concerned people.

Exactly, the eastern seaboard area is the most densely populated region of the country, in addition to the inland areas affected, 75 million may be the low side. New York state along has only a few million less than Australia in population. 23 million in Australia, 20 million in New York, with 8-9 million in New York city. Rath gets his kicks out of being a jerk, "Australia's cyclone is bigger than your Katrina". Who cares! 🙄

Reminds me of my wife. I say Black she sez White...

Listening....I mean reading the live twitter feeds last night was a sad sad case. It's pathetic how utterly stupid we as a people we have become....Even the so called officials got knee deep into it, Obama was tweeting, Christie, Cuomo, Bloomberg's staff was pounding away.. Sad sad sad........

She will knock Katrina from the perch and become no. 1 costliest storm of all time....I guarantee it. She cooked an entire transit system....even the cabs are toast..Blew a major elect hub, burned down a few hundred houses, swept countless others out to see......dropping hundreds of thousands of trees.........killed wall street for two, maybe three full days............few billion in business per day....ETC ETC ETC.

The Death toll is up to 50 and will most likely end up being more.
Cost of the storm is said to be incalculable but some are estimating 50-100 billion.

If it weren't for all this "propoganda" then I'm sure the death toll would be in the thousands, if not tens of thousands.

One of my pet peeves " the things they don't tell you " I can list many.....but can never accurately tell you why this is.

Let's talk health issues........Question: Any idea WHAT is swimming in the water in the affected areas....? If they tell you that they know and have taken precautions..............THEY ARE FLAT OUT LYING.

I wish I had time to illustrate but something tells me ( based on the news coming out of that area ).............it would be a waste of valuable time and most likely fall on deaf ears.

There are professional LOOTERS and highly skilled PRICE GOUGERS.........They all know that local LE--OFFICIALS are faced with more pressing matters when these things occur..........so they take advantage.

I'll leave Bloom bird alone----------he's already done himself in....Saying that the Subway would be out 4-5 days should get his ass fired on the freaking sport.....Try 4 - 5 WEEKS---------Maybe longer.. Saying he's ridiculously ill-informed would be putting it kindly.