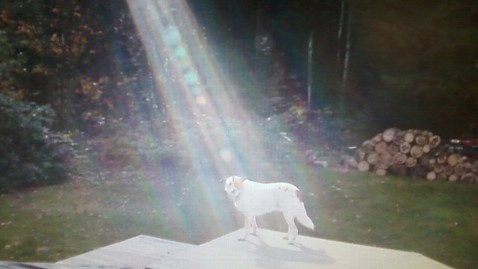 It was an overcast day in Newport, N.H., when a simple “20/20″ shoot turned into something that made me wonder about life after death.

I was filming soldier Justin Rollin’s parents Skip and Rhonda playing with their dog Hero, whose rescue from the Iraq War zone where Justin died was nothing short of a miracle.

Sometimes when Rhonda hugged Hero she would softly pet her face and coo, “Justin, are you in there?” It was Rhonda’s gentle way of remembering their son and his last living connection to Hero. At one point, Hero wandered off and took a stroll in the backyard. All of a sudden, the clouds broke and a light began to solidify in a beam directly down on Hero — a kind of vertical halo.

As this dramatic ray of light was shining on Hero she turned to look at me, and it was all I could do to hold the camera steady and not drop it in astonishment. It was an unforgettable moment, and made me wonder if in fact Justin was in there. Then the light vanished.

I couldn’t wait to check my camera’s playback to see if it caught the stunning beam. When I saw that it did, I was so happy that I burst out dancing. It was a great moment to share with Justin’s parents. We all laughed together, and wondered if perhaps this had been a sign from Justin.