Has become clearer by the day that this was an obvious False Flag attack: Albeit my opinion, it's the opinion of many many others as well. I spent a good amount of time this last week reviewing any available material, listened to the recorded scanner tapes, and reviewed initial interviews..

Some of the witnesses have been said to have been at other high profile shooting events in the recent past. If you were to look carefully with an open mind you can indeed see that some appear in many of the occupy protest footage. This makes them actors and should cause you to question their true identity.

This sucks, that's about all I can say. It's likely......( very very possible ) that Holmes never fired a shot.............he was simply too drugged up to have had the capability.....simply crashed out in the car waiting for the cops playing his role.

Even to this day he's no idea where he's at, or what really happened.. It's just crazy.

This kid was brilliant beyond belief.....so what's really going on here. Worked for the Salk Institute as a RESEARCHER......While still in High School.........Just think about this:

The selling of the tale is so over killed......that the cost of the 6,000 round purchase of ammo ( and other rounds ) is north of 10-k alone.....let alone the other weaponry and gear....This simply stinks to High Heaven..

One very very glaring red flag was the very first Interview given by Oates...I doubt anyone here has seen it...When you compare it to his rehearsed presser......it's clear that he's hiding details... One being the question he refused to answer: It was asked twice...." Were their CCTV cameras in and around the Theater area? " He deflected the first..............simply refused the second, dismissed it...

Then you have Kelly...NYPD's police Chief offering his take..." WHY " Why Interview him? He's 1,500 miles away....Just an obvious lone wolf sales job...doesn't make any sense.

It's been said by one person that the Two who were Interviewed ( with the 3 month old ) are actually actors.....both have been at high profile events in the past.....the baby was a prop.........and the very first national interviewee / witness...is related to a producer for the network NBC.

Jessica Ghawi's real name is supposed to be Jessica Redfield, who just so happened to be in Toronto @ the Mall thing.....she actually joked about it being staged on twitter...joked when called out by someone else....Strange, very strange.

The trauma Nurse drowning " undetected by national media " very strange as well....very very sad..actually passed on the 7th only found out on the 14-15th...

Also no national coverage of the event in Texas.....You know where the citizen saved a Deputies life by opening fire on a shooter who had the Deputy pinned down. Only the Sheriff's office posted a video on youtube....NO ONE ELSE. Not even any independent images on google... And you think the Aurora event wasn't about Gun Control...better rethink it.

It's becoming clear that is was something other than what is being told. More lies as opposed to telling/reporting the truth. Makes me sick.

All true and never covered by any MSM on a national level....The Perp killed two people...and no mention....Wonder why!!!

All mass murders are part of the NWO alien plot to rule the world, duh.

Just how old are you folks anyway.
Ridiculously obvious.

Old enough to know that you're full of it.

"DIss0n80r" wrote: Old enough to know that you're full of it.

Just who smiles amid all that gore.. :crazy: :crazy: 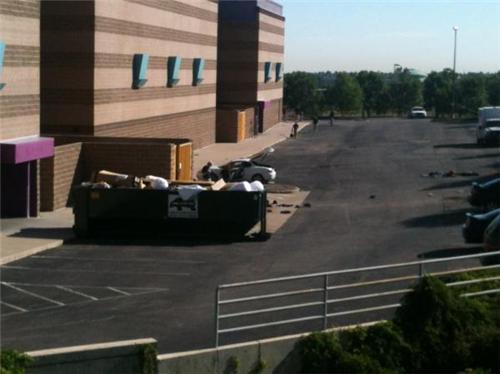 someone posted that Jessica Ghawi aka Jessica Redfield.....aka .......had been killed in the theater, they did this at 6:05 or so am yet...hours later..........one man printed out a flyer of his son and supposedly begged the media to help find him...I guess he couldn't find the morgue..who knows.

Don;t think the Hospital gives out names of the dead under such circumstance...somthin call HIPPA...or something....Privacy/Lawsuit issue....maybe you sleep through such things!

All I'm saying is that after the smoke has cleared there are far too many things that simply don't add up....at least to me anyway. But hey you might very well be right....maybe I'm full of it!

Oh and do try not to get this thread locked up.....okie-dokie! 😉

Massacres are rarely nice and neat. You are delusional.

Again you miss the point, never comment, never give any worthy input. It's something you do on purpose....as a means of derailing a topic.

On the other hand maybe I'm wrong...again...maybe you really are that slow. 😉

Maybe you can explain why the chick in the pic above is grinning ear to ear amid such carnage.. 😉 I can't cause " as you say " I'm delusional..

Some real world watchdogs are calling it a staged photo....IT'S WHY I POSTED IT...Don't lead people to believe otherwise, it's amateurish to do so...What would your peeps think. lol

Nurse who helped save victims of the Batman massacre drowned weeks later on vacation with her son, 5, and husband 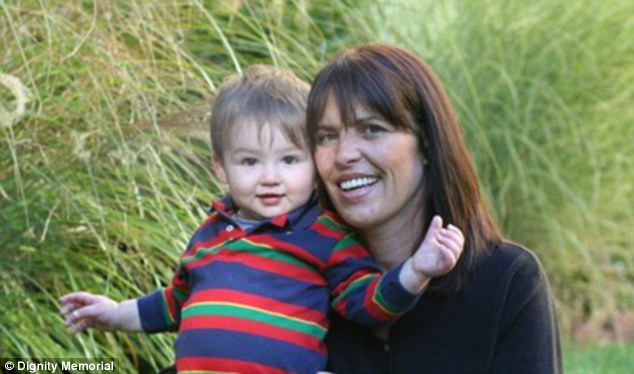 A nurse has drowned just weeks after she helped save the lives of victims in the Aurora Batman massacre in Colorado.

Jennifer Gallagher, 46, of Denver, died earlier this month while she was on vacation in Iowa with her husband and her five-year-old son.

She went swimming in West Lake Okoboji the night of August 6 and was reported missing the next morning. A family member found her body in the water later that day; it is not clear how she got into difficulty while swimming.

poor quality......photo...why? What a rag....I'll see if can find a better one..They should be everywhere now, where at first there were NONE.... 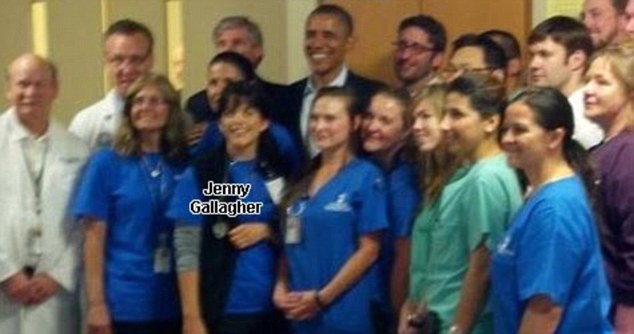 Despite the irony a truly very sad event.

I can easily think of a differnt meaning for the girl on the car smiling. Maybe these people just got news their loved one was safe, and she was relieved and happy for the couple. You need to find out the facts, not make them up. The picture with Obama is a not brainer, he was praising them for the lives saved as first responders. The nurse who drown was tragic, but not a indicator of anything with the shooting.

Note: I deleted my first input for you.

Cole, I hope this is a lesson to you this time! How many times I have had to argue with you over, "Look what I see" in the still pictures you find, along with the Cole Trickle rendition, just like this one. You post 3 pictures and make up some ridiculous story of this is something cynical, because "that girl is smiling". All faked and staged, and you insist, we are being duped! After my above post, I did a little searching to find your picture and the real story behind it, not your fabicated boloney. Your pattern is, if you do not buy into it, you are telling everyone off, usually me, and shaming everyone for it.

I found your picture, by seaching "Pictures of Aurora victims found safe". That led me to an aritical about medical bills for victims being paid and series of about 60 pictures, and BINGO, yours was right in the middle. This is the link directly to it! It explains who they are, and what they were doing. The Young girl was found safe, and the lady with the glasses is her mother. They are hugging in another picutre of that group of 60 photos. The man she is hugging is her daughters friend, and when you read the caption, ANY IDIOT CAN READ IT, they were glad to have found each other, you can see the Mothers relief, the mans relief, and the daughter looks on smiling. This picture is totally explained, and my guess is you also saw the caption yourself, but choose to misrepresent the picture to us.

I'm sorry Cole but this is just another idiotic example of how you let you imagination MAKE UP, some far fetched idea, something is a a conspiracy, or cynical is happening.

This is what is wrong with the internet Cole, people like you who do not know shit from shinola, make this crap up, and it spreads all over the web worldwide. People who do not know any better believe it, repeat it, and it becomes Gospel. God only knows what you imagine about yourself!

Like all your other little games with pictures, thinking you see something, you really are seeing nothing. THE REAL TRUTH OF THIS PICTURE IS IN THE CAPTION, AND IT TOTALY BLOWS YOUR FABRICATION OUT OF THE WATER. Not to mention your credibility! I honestly do not know why I wasted a second of my time, other than its tiring, hearing your condesending rants, that everyone in the world is stupid. That this is what the internet has turned into, a cesspool of lies and fabrications.

If you can not admit you were totally wrong, and letting you imagination run wild, there is something wrong with you.