A young emperor penguin found washed up on a New Zealand beach is recovering well and could swim home next month. 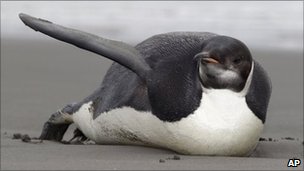 Staff at Wellington zoo said results of an X-ray and blood test showed "Happy Feet", as it has been named, is fine after endoscopic surgery.

The penguin was found on Peka Peka beach, about 60km (37 miles) north of Wellington - some 3,000km from its home in Antarctica.

Experts had been reluctant to intervene as the bird appeared to be healthy.

However, it later grew lethargic and was operated on to remove sand from its stomach.

A Zoo spokeswoman, Kate Baker, said the penguin has gained about 4kg (9lb).

It was given a first swim at the zoo earlier this week, in salt water that was cooled to below 0C (32F).

Crowds have been flocking to the zoo to see the bird - the first such arrival of an Emperor penguin in New Zealand in at least 44 years.

Hundreds of people had gathered to watch a leading gastroenterologist from Wellington Hospital perform the endoscopy on the bird at the zoo in late June.

To help it feel more at home, the penguin is being kept in a room chilled to about 8C. There is a bed of ice for it to sleep on.

Zoo staff said the bird would probably be released offshore from the south end of the country early next month.