My Two Cents
This board is open to international traffic, EVERY COUNTRY has its exuberent nationalist patriots. I read posts here all the time whose posters fit that bill, be they Americans, British, Canadians, Australians, Russians, or whatever else. Some people wear their national pride on their sleeve as surely as they fly their flag on their porch. But sometimes its best to look past that rhetoric, whether one likes it or not and see what the positive things each person brings to the discussion.

Ask yourself how many times you've spoken out against another nation. I know I have I've had plenty of Anti-Israelism, Anti-Canadaism, and even anti-Iranism. I know I've seen plenty anti-Iraqism, anti-North Koreaism, anti-Chinaism and anti-Japanism here.

So in the end I see Pot Kettle Black.

Sorry Aquatank but making up lies about the USA, is not the same pot as North Korea, Iran, and other terrorist nations.

"greeney2" wrote: Sorry Aquatank but making up lies about the USA, is not the same pot as North Korea, Iran, and other terrorist nations.

Thank you John Sr....exactly the point I was making....

Yes I am a Mod but I never abuse the responsibility that John Jr. gave me. Also I never advocated forcing Rath off the Board or any abusive behaviour by any of my Fellow Mods or BV Members....

I'm not sure lies and opinions are very well seperated when it comes to speaking out about other nations. As I see it every nation's people live a very sheltered existence reliant on their own country's mass media and education systems as the basis of their opinions. We all view each other through a tunnel vision of our nations policies and cultural identity. Complicating this is viewpoints and facts are skewed to match these identities and views of our own. Example: Here in the USA how much do you know about Foreign Pop Music? America tends to export its pop culture, but rarely ever imports any. This lead to a skewed perspective from foreign nations who see many of pop culture excesses as the norm. I had a foreign roommate once who asked what kind of gun I owned, I told him "none" and he was aghast "I thought all Americans owned guns.", he got that viiew from all the movies we export. Similarly the extravagent lifestyles of our rich and famous are often seen as the norm by other nations people so when viewed from a conservative nations people we appear sinful and decadent. The same type of misinformed bad influences hold true of how we Americans view other nations.

[quote="Aquatank"] Example: Here in the USA how much do you know about Foreign Pop Music? America tends to export its pop culture, but rarely ever imports any. /quote]

Plus the Liverpool Sound is a complete Myth. British Kids covered American R&B and Soul Tunes they recieved from British Sailors that bought such records when they were in Southern and American Ports ...

All of whom sang in English, hence cultural bias.

How many music groups do you know from Tanzania, China, Taiwan, Chad, France, Austria.

How many of us watch Bollywood movies to know their stars names.

Every place in the world has muscians and many places make movies, but each nation is sheltered from the others. I've often looked for music on yahoo and Youtube just to run into the message "Sorry this video is not availiable in your country" because of international licensing and distribution rights, rights controlled in part by our own companies limiting what we can see and hear. Every country is like that control over what we see hear and read to shape our opinions is controlled by the domestic companies and governments.

"Aquatank" wrote: All of whom sang in English, hence cultural bias.

How many music groups do you know from Tanzania, China, Taiwan, Chad, France, Austria.

Call me biased but, no thanks.

By the way the majority of the music I listen to is imported from Europe. The internet opened me up to it since it doesn't play on the radios here and isn't advertised. I can't even buy most of it here in the USA except for internet purchase/digital download.

In fact, the song playing on my playlist right now is performed by Petra Marklund from Sweden.

In any event, you envision a strange, PC world aquatank. I half-expected a koombaya in closing after your post. 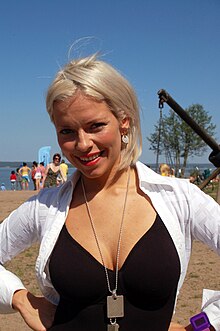 I don't agree with political correctness I find it stupid, BUT what I am saying is everyone should be wary of throwing rocks while inside glass houses. What goes around comes around.

I understand. Well, my point was, it seemed as if you believe that Americans reject music from China, Tanzania, Taiwan, etc. because we are bigoted and think our music is superior. On the contrary, their music just sucks, and that's why we don't listen to it.

Just kidding, but it's a cultural thing and has nothing to do with bigotry or discrimination.

Someone sent me an email with several photographs of a Chinese Walmart. I just about threw up it is so disgusting what they sell and how they present it.

I could never live in China after seeing that email. It was traumatizing. In fact, I just found a link to the photos. Here are just a few:

Oh I know there will be cultural bias its nearly impossible to get around, but I thinks its important to remember that cultural bias is also directed at Americans and we have to learn to tolerate it better instead of going on about anti-Americanism. America is not an ism, how many nations refer to sentiment against themselves as an ism like I outlined above very few if any. One thing I generally notice about anti-American sentiment is its generally not about the citizens but about our governments & corporations policies that are percieved as threats, insults, or in support of generally bad behavoir on the part of the USA's government & corporations. We citizens should no longer continue to support the "My Country Right Or Wrong"/"Freedom isn't Free" mentality that allows our government and corps to run roughshod over other nations and their people without attempting to stop the abuses. Because as long as we continue to do so the longer other peoples have to build up negative bias against us. We can't continue to go claiming to be spreading democracy while installing & or supporting military dictatorships against the will of a nations people, nor should we arm human rights abusers and ignore the abused because they choose to fight abuse oppression. I'm not saying oither nations don''t do the same but isn't about time the uSA rose above that and corrected its mistakes and do the morally right things? If the uSA can rise above that the other nations will follow example.