Yes..i know this news is old..

Two of the best known crystal skulls - artifacts once thought to be the work of ancient American civilisations - are modern fakes, a scientific study shows.

Crystal skulls are the focus of the story in the latest Indiana Jones film.

But experts say examples held at the British Museum in London and the Smithsonian Institution in Washington DC are anything but genuine.

Their results show the skulls were made using tools not available to the ancient Aztecs or Mayans.

Researchers say the work, which is published in the Journal of Archaeological Science, should end decades of speculation over the origins of these controversial objects.

And it casts serious doubt over the authenticity of other crystal skulls held in collections around the world.

A team including Margaret Sax, from the British Museum in London, and Professor Ian Freestone, from Cardiff University, used sophisticated techniques to work out how the two skulls had been made.

There seems to be the assumption that if it is roughly worked, it is more likely to have been made by a traditional society. That's untrue of course
Prof Ian Freestone, Cardiff University
"There are about a dozen or more of these crystal skulls. Except for the British Museum skull and one in Paris, they seem to have entered public awareness since the 60s, with the interest in quartz and the New Age movement," Professor Freestone told BBC News.

"It does appear that people have been making them since then. Some of them are quite good, but some of them look like they were produced with a Black & Decker in someone's garage."

He added: "There seems to be the assumption that if it is roughly worked, it is more likely to have been made by a traditional society. That's untrue of course, because people were quite sophisticated. They might not have had modern tools, but they did a good job."

The researchers used an electron microscope to show that the skulls were probably shaped using a spinning disc-shaped tool made from copper or another suitable metal.

The craftsman added an abrasive to the wheel, allowing the crystal to be worked more easily.

This "rotary wheel" technology was almost certainly not used by pre-Columbian peoples. Instead, analysis of genuine Aztec and Mixtec artefacts show they were crafted using tools made from stone and wood.

The British Museum skull was worked with a harsh abrasive such as corundum or diamond. But X-ray diffraction analysis showed a different material, called carborundum, was used on the artefact in the Smithsonian.

Carborundum is a synthetic abrasive which only came into use in the 20th Century: "The suggestion is that it was made in the 1950s or later," said Professor Freestone.

Who made the skulls is still a mystery. But, in the case of the British Museum object, some point the finger of suspicion at a 19th Century French antiquities dealer called Eugene Boban.

"We assume that he bought it from, or had it made from [craftsmen]somewhere in Europe," said Professor Freestone, a former deputy keeper of science and conservation at the British Museum.

Contemporary documents suggest Mr Boban was involved in selling at least two of the known crystal skulls - the one held in London and another in Paris.

The London skull was probably manufactured no more than a decade before being offered up for sale.

Despite the findings, a spokeswoman for the British Museum said the artefact would remain on permanent display to the public.

The skull held by the Smithsonian was donated to the museum anonymously in 1992, along with a note saying it had been bought in Mexico in 1960.

Nothing is known of its history before that date, but like the British object, it was probably manufactured shortly before being purchased.

The researchers were not able to determine where the quartz used in the skulls was quarried. But locations with suitably large deposits include Brazil, Madagascar and, possibly, the Alps.

Professor Freestone said the work did not prove all crystal skulls were fakes, but it did cast doubt on the authenticity of other examples: "None of them have a good archaeological provenance and most appeared suspiciously in the last decades of the 20th Century. So we have to be sceptical," he explained.

The findings are likely to be a disappointment to enthusiasts and collectors; the skulls have become a part of popular culture, appearing in numerous films and novels. 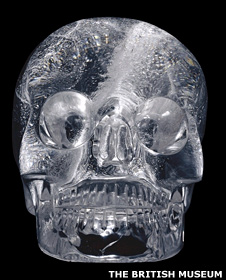 The studies only show that they where made with sophisticated tools. Their conclusion is precipitated, since they eliminate the possibility of ancient people to build sophisticated equipment, which will be insolit, but not impossible. Examples of that: Pyramids, monoliths, The Baghdad Battery, etc. No one knows how they where built, or how the knowledge of the people who built them was achieved, but all that doesn't matters because the evidence have been there since the beggining, and can't be denied (even doe there's so many people trying to misscredit it).

There's people who don't want us to know the truth, and will do anything to achieve what they want.

Consider the facts with an open mind and do your own judgements. Be free!!

Yes, I'm sure that some of the crystal skulls were made in modern times using modern tools. Whats to stop someone from doing that? Anyway, that doesn't explain them all. I agree with the previous post. IT seems that someone is going through a lot of trouble to try and "prove" that the crystal skulls are fakes made in modern times since they didn't have that technology bakc then. That presumption is simply ridiculous. Take the prymids, easter island, stonehenge, etc. There are many ancient mysteries that can't be discounted.