UFO Lands In Front Of Brazilian Cyclists During Race, Video And Photos 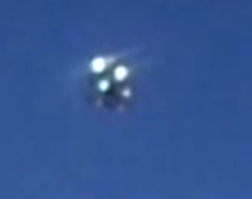 UFO Lands In Front Of Brazilian Cyclists During Race, Video And Photos

The amazing UFO  was photographed in the mountains of Senhor Do Bonfim, Brazil, Apr 14, 2013  The unidentified flying object (UFO), was seen in the Serra do Gado Bravo by  two cyclists who called it to the attention of many others in the area. The images were taken by  Raymond Pool and Igor Geovani while participating in a trail mountain bike competition. According to witnesses the oval object, suddenly appeared and caused a big surprise.

The witnesses spoke to the Brazilian news site falandotudo.com  and reported  that the flying object made a slight noise, like a sewing machine when it was seen coming out of the forest. “Raymond saw and shouted for the camera, I was scared, I thought about the race, but endured the fear and took some pictures, said Igor Geovani who took six pictures of the object.

According to the two friends,  the UFO was seen around 15:30 and stayed for about 15 minutes in the air before disappearing in an unimaginable speed. The object  landed in a place that was difficult to access and very are when the two noticed its presence and they started taking pictures” Raymond commented swimming. Asked about the size of the ship, he said, “was the length of the car.”

The Serra do Gado Bravo is an extension of the Chapada Diamantina mountain range with the peak in the municipality of Senhor do Bonfim da Bahia north. The site is known as a stage for various soils. The photographic record of the supposed “alien spacecraft” was sent to ufologist Gaucho Ubirajara Lins,  for analysis.